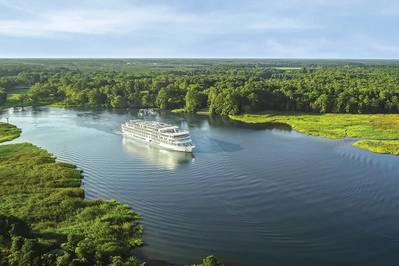 The newest riverboat for the Mississippi River passed sea trials late last week and is on its way to New Orleans for an on-time start to its inaugural season on the Mighty Mississippi. American Cruise Lines said it has accepted delivery of the American Symphony from Chesapeake Shipbuilding as scheduled.

American Symphony is the fifth riverboat in the Line’s series and the 15th small ship built by Chesapeake for American. The 175-passenger new boat will immediately join the company’s expanding Mississippi River fleet. American Symphony’s first cruise is set to depart August 27, 2022, from New Orleans, and American Cruise Lines plans to christen the riverboat during its inaugural cruise on August 30th in Natchez, Mississippi.