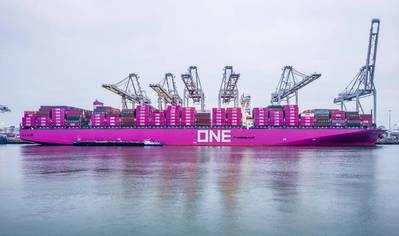 Europe's largest port, the Port of Rotterdam ended 2018 with a total container throughput at 469.0 million tonnes (MT) which slightly higher than in 2017,  which was itself a record year (467.4 MT).

Container transhipment was the engine of growth again, with a 4.5% increase in tonnage. Measured in TEUs, the standard unit for containers, the increase was 5.7% and the annual total was 14.5 million TEUs – also a record.

This strengthens the position of Europe’s largest container port in this strategically important market segment. Significant underlying shifts were observable in the goods segments.

Whereas container transhipment continued to grow at a healthy pace, that of crude oil, mineral oil products and agribulk fell. Throughput of LNG (+163.6%) and biomass (+31.6%) saw a further spectacular rises last year.

By far the largest part of this amount was used to further improve the logistical accessibility of the port of Rotterdam, for example by constructing the Container Exchange Route on the Maasvlakte, the Princess Amalia Viaduct and relocating the port railway via the Theemsweg route. Also, the Port Authority’s internationalisation strategy was given a significant boost in 2018 by the acquisition of a minority stake in the Brazilian port of Pecém.

At least as important as this economic contribution is the social contribution that the Port Authority makes to the improvement of the living environment. We contribute to safety in the port, both through physical infrastructure such as security cameras and in terms of resilience against cyberattacks.

The Port of Rotterdam Authority is committed to drastically reducing CO2 emissions in order to help achieve the ambitious national climate target. We want to play a pioneering role and make the port an inspiring example of human capital, so that the Rotterdam port and industrial area will still be making a substantial contribution to Dutch prosperity and employment in 2050.

One important employment initiative introduced recently is the Leer Werk Akkoord. This joint scheme involving the Port Authority, the municipality, educational institutions and the business sector offers real jobs for the long-term unemployed in the Rotterdam-Rijnmond region.

The Port Authority expects throughput volume to increase slightly in 2019, with container sector growth being lower than the exceptional levels seen in previous years. The Port Authority is implementing a ‘both-and’ strategy: strengthening the existing port industrial complex and at the same time embracing new initiatives in the fields of energy transition and digitisation.