Royal Caribbean has unveiled new design details for what is set to be the world's largest cruise ship, Icon of the Seas.

The 250,800 GT vessel, the first in Royal Caribbean's new Icon-class, is being built by Finnish shipbuilder Meyer Turku, who began construction in June. First announced in 2016, the mega cruise ship is scheduled for delivery in October or November 2023.

The 1,198-foot-long Icon of the Seas will have 20 decks (including 18 guest decks) and will be bigger than the world's current largest cruise ship, Royal Caribbean's Oasis-class Allure of the Seas. With 2,805 staterooms, the ship will be able to carry 5,610 passengers at double occupancy, or up to 7,600 passengers if every cabin is maxed out. It will have capacity for a crew of 2,350.

In addition to being the world's largest cruise ship, Icon of the Seas will also be Royal Caribbean's most environmentally friendly. The vessel will run on liquefied natural gas (LNG) and utilize fuel cell technology. Other notable green features include air lubrication to reduce hull friction, shore power connection and an advanced waste heat recovery system to turn waste heat into up to 3 megawatts of extra energy.

The ship will also feature the largest waterpark at sea, with six record-breaking slides, as well as nine whirlpools and seven pools on board, including the first suspended infinity pool at sea. The vessel will have eight distinct "neighborhoods" that offer a variety of experience options for passengers.

"Now more than ever, families and friends are prioritizing experiences where they can bond and enjoy their own adventures," said Michael Bayley, president and CEO, Royal Caribbean International. "We set out to create a vacation that makes all that possible in one place for the thrill-seekers, the chill enthusiasts and everyone in between, without compromise. It's this first-of-its-kind combination that makes Icon the future of family vacations, and that future is here."

Icon of the Seas will sail from Miami starting in January 2024, offering both Eastern and Western Caribbean sailings. 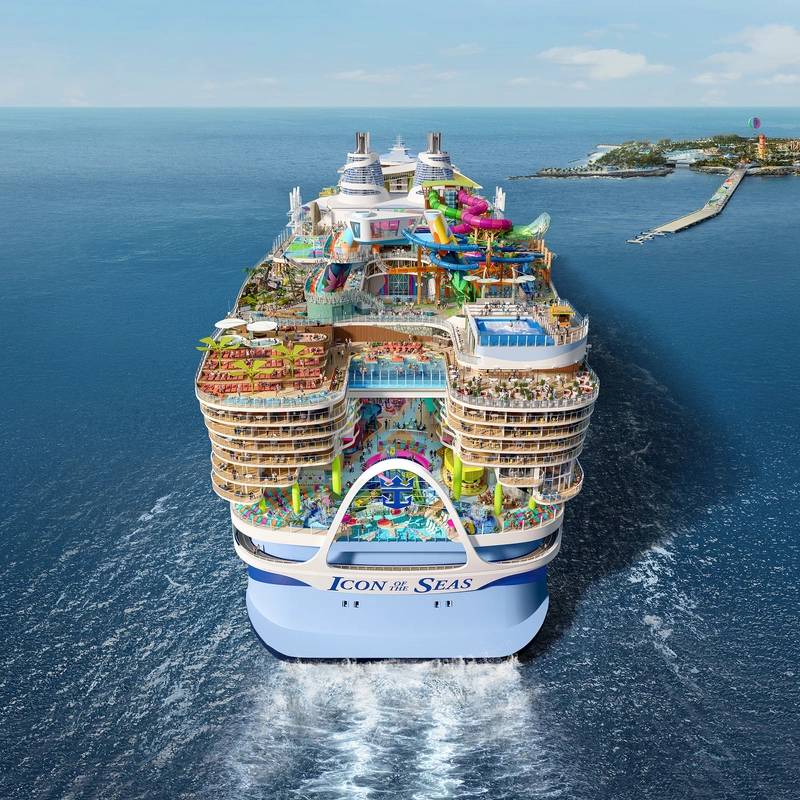