Ørsted and Eversource to Charter Newbuild CTVs from WindServe and AOS 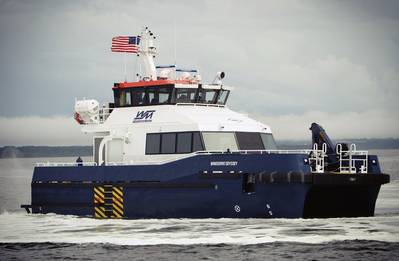 The purpose-built aluminum catamarans are designed to handle the unique offshore conditions at the wind farms, which will be located 15 miles off the Southern New England coast, and to transport technicians and materials to and from the wind farms and local ports.

Vessel construction is expected to start early this year at WindServe Marine’s affiliate shipyard, Senesco Marine, at Quonset Point in North Kingstown, on the 88-foot long BMT-designed WindServe CTVs, and at Blount Boats, in Warren, on the 101-foot long AOS vessels, which are based an a Northern Offshore Services (NOS) design. All five will be built over the next two years to provide crew transfer support during the construction phases of the Ørsted and Eversource joint venture’s three Northeast projects. The first vessel is scheduled to be completed by early 2023.

“Rhode Island knows offshore wind and we are proud to be delivering even more jobs to the Ocean State’s marine trades to build these new crew vessels,” said David Hardy, Chief Executive Officer of Ørsted Offshore North America. “Our continuing commitment to Rhode Island shipbuilders, together with our selection of first-rate regional vessel operators, is just the latest example of our work to build a domestic supply chain to support the growing offshore wind industry.”

“Rhode Island has a long history of leading in ocean-based industries and has established one of the country’s most innovative and expansive blue economies,” said Joe Nolan, Chief Executive Officer and President of Eversource Energy. “This partnership between two outstanding local shipbuilders and two major vessel operators will be critical as we build and operate our portfolio of Northeast wind farms. Offshore wind is a growing industry with tremendous potential to create jobs and grow the domestic supply chain, and with today’s news, we are proud to once again help turn that promise into a new reality.”

Ørsted and Eversource said their chartering of the five new vessels will create about 80 local construction jobs at Senesco and Blount Boats, plus another approximately 48 jobs for captains and crew who will work aboard the vessels, primarily during the wind farms’ construction. A number of regional suppliers will provide vessel components, such as electronics, engines, cranes, aluminum and safety equipment.

"The AOS newbuild program for Ørsted and Eversource will bring over 40 skilled shipyard jobs to Rhode Island,” said David Kristensson, owner of Northern Offshore Services, a co-owner of AOS. “In addition, this partnership will give dozens of U.S. merchant mariners the opportunity to embark on a new and exciting career path, throughout the Northeast. We are thrilled to bring the first purpose-built hybrid ready CTVs to the U.S. market for Ørsted and Eversource and remain poised on delivering on our promise to bring maximum economic benefit to local suppliers."

“Blount Boats has emerged as a leader in the CTV space having built two of the three U.S. flagged CTVs currently in operation,” said Marcia Blount, President of Blount Boats, Inc. “Blount looks forward to substantially increasing its highly skilled workforce while maintaining its reputation for quality construction during the build of these hybrid ready CTVs, the first vessels in the AOS fleet.”

“Senesco Marine is proud to continue its partnership with WindServe Marine to build innovative and efficient CTVs for Ørsted and Eversource,” said Ted Williams, President, Senesco Marine. “Capable of builds of all sizes, CTVs are one of many vessel types that Senesco Marine builds with the highest of quality and safety standards. Senesco will commence local Northeast construction on three CTVs in early 2022 to support the expanding offshore wind industry on the East Coast.”

In the years ahead, it's expected that potentially dozens of CTVs will be built as part of a new fleet of Jones Act compliant vessels required to support the construction and long-term service of a pipeline of new offshore wind farms slated to sprout up along the U.S. East Coast. The Biden administration is targeting 30 gigawatts (GW) of offshore wind energy in development by 2030.

Among the largest offshore wind partnerships in the U.S., the Ørsted and Eversource joint venture is playing a unique role in the development of a domestic offshore wind supply chain.

In December 2016, Ørsted and Eversource teamed up to generate clean energy industry in the Northeast, and this partnership has grown to include three offshore wind farms including the 704-megawatt (MW) Revolution Wind project serving Rhode Island and Connecticut, the 130-MW South Fork Wind serving Long Island, and the 924-MW Sunrise Wind project serving New York. All together, these projects will generate 1,760 MW of clean, renewable energy – enough for more than 1 million homes. The JV has the potential to more than double its existing portfolio within its current jointly-owned uncontracted offshore wind energy lease areas.