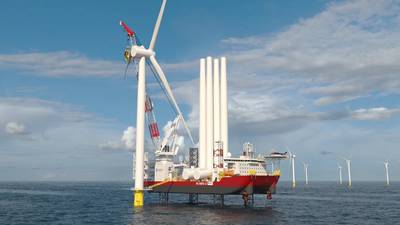 Offshore wind developersØrsted and Eversource have agreed to charter Dominion Energy's Charybdis, the first Jones Act-compliant offshore wind turbine installation vessel in the United States, for the construction of two offshore wind farms in the Northeast.

Charybdis is being built in Texas by Keppel AmFels and will first be deployed out of New London harbor to support the construction of Revolution Wind and Sunrise Wind offshore wind farms, both of which are being developed jointly by Ørsted and Eversource. The wind turbine installation vessel is expected to be sea-ready by late 2023.

Once constructed, the two offshore wind farms will serve nearly 1 million homes in Rhode Island, Connecticut, and New York, and will generate more than 1.6 gigawatts of electricity.

Worth noting, the charter terms will allow the vessel, subject to state regulatory approval, to support the construction of Dominion Energy's 2.6-gigawatt Coastal Virginia Offshore Wind (CVOW) project off the coast of Virginia Beach, which is expected, consistent with prior guidance, to be completed in 2026.

The vessel, which will cost approximately $500 million to build, will operate as part of Dominion Energy's Contracted Assets segment.

According to Dominion, at peak construction, 1,000 U.S. workers will be employed on this project. Once complete, the vessel will be homeported in Hampton Roads, Va., and utilize an American crew.

The vessel is designed to handle current turbine technologies as well as next-generation turbine sizes of 12 megawatts or larger. It will also be capable of the installation of foundations for turbines.

For use on Revolution Wind and Sunrise Wind, the vessel will work from State Pier in New London, Conn.

"Offshore wind is critical to America's clean-energy future and the Charybdis plays a vital role in reaching the Biden Administration's ambitious goal of 30 gigawatts of offshore wind production by 2030," said Bob Blue, Dominion Energy's chair, president and chief executive officer. "We look forward to working with Ørsted and Eversource on the construction of Revolution Wind and Sunrise Wind to continue to grow the offshore wind industry in the U.S."

"This new, state-of-the-art American-made wind turbine installation vessel is a major milestone for the offshore wind industry at both the local and national level," said Joe Nolan, President and Chief Executive Officer of Eversource Energy. "As offshore wind continues to grow in Connecticut and throughout the U.S., we are seeing the birth of a new, domestic supply chain that will create thousands of jobs across the country for decades to come. We are proud to partner with Dominion Energy as the first-ever users of this new world-class vessel and bring it to New London to support our work at State Pier and deliver local jobs and economic investment."

"A Jones Act-qualified installation vessel is a game-changer for the development of the U.S. offshore wind industry," said David Hardy, Chief Executive Officer of Ørsted Offshore North America. "This investment will enable us to unlock the economic benefits of offshore wind, not just for the Northeast, but for the Southern states as well. We're proud to partner with Dominion Energy and Eversource on this historic milestone."

"New York leads the nation with five active offshore wind developments, including the Sunrise Wind project, and the chartering of this historic vessel will play a critical role in not only achieving New York's ambitious offshore wind energy goals, but our larger efforts to fully combat climate change and drive a robust, clean energy economy that benefits all," said New York Governor Andrew M. Cuomo. "New York remains steadfast in its commitment to further grow the burgeoning offshore wind industry in the United States and we will continue to work with our regional partners to unlock the enormous potential for green energy to create jobs and build a cleaner future for all."