Russia to Disinfect Ships from Iran, Italy and South Korea 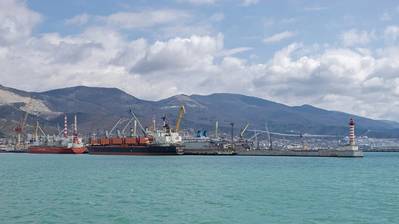 Russia has ordered the mandatorydisinfection of ships arriving at the Black Sea ports of Novorossiisk and Yuzhnaya Ozereyevka from Iran, Italy and South Korea because of the coronavirus, a  document seen by Reuters showed.

A branch of Rospotrebnadzor, Russia's consumer safety watchdog, has ordered port agents "to arrange the disinfectionof ships arriving from these countries before the border is opened" in the city of Novorossiisk, the document showed.

Novorossiisk port is one of the biggest on the Black Sea. It handles grain, coal, mineral fertilizers, timber, oil and oil products, containers, food and chemical cargoes.

Rospotrebnadzor did not immediately respond to a request for comment.

A source in Novorossiisk who is familiar with the matter told Reuters "not many" ships were arriving from the countries identified "but delays are obviously possible" in processing those that do.

It was not immediately clear how the vessels would be disinfected, the source said.

The Yuzhnaya Ozereyevka terminal is the end point of the CPC trunk oil pipeline that connects the Tengiz field in Kazakhstan, and a number of other fields, to the sea terminal near the Russian Black Sea port of Novorossiisk.

Transneft said on Thursday it had suspended business trips for its staff due to the coronavirus outbreak, Interfax news agency reported.