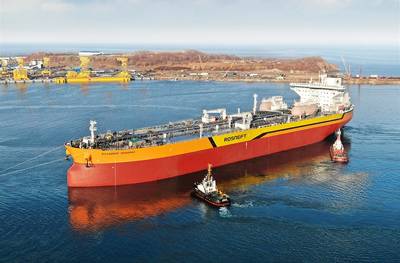 The milestone vessel Vladimir Monomakh is the first Aframax ever to be built in Russia and is one of 12 currently on order at the yard, which is owned by a Rosneft-led consortium.

The Vladimir Monomakh was launched using Zvezda's unique Vympel floating transfer dock, which enables the longitudinal launching of ships up to 300 metres in long and over 50 metres wide from three different shipyard slipway lines as well as the sideways launching of offshore facilities such as drilling rigs. Zvezda calls the dock "the most important part of the shipyard".

Preparation for the launch took almost a day, the builder said. The tanker was rolled by a vessel trolley-transporter from the open outfitting slip to the floating dock before being launched into the water.

The shipbuilding order was signed in September 2017 in the presence of Russian President Vladimir Putin as part of a package agreement including the design, construction, technical supervision, operation and training of the crews of 10 Aframax class tankers for Rosneft. Putin returned to the shipyard a year later to witness the keel laying of the first-in-class vessel.

Prior to launching the first tanker, four Aframax tankers were in production at the yard's heavy outfitting berth, and first steel was cut for the fifth in February 2020.

The 250-meter-long, 44-meter-wide tankers will be ice class ICE-1A, capable of running on liquefied natural gas (LNG) and deigned to reach speeds up to 14.6 knots. 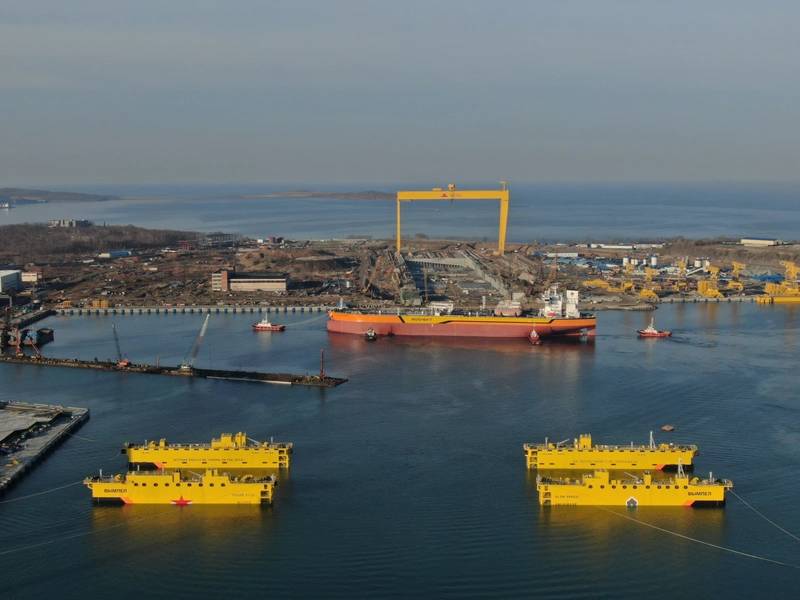 While a number of vessels are already on order and being built at the Zvezda shipyard for customers such as Gazprom and Rosneft, the Russian Far East site is also currently underdergoing construction of its own.

A second phase, including the addition of a dry dock and additional full-cycle production shops for construction of large-capacity vessels and marine equipment, will further expand the shipyard’s capabilities, Zvezda said.

The yard said it presently employs about 3,500 workers, 87% of whom live in the Far East. By the time the yard is completed in 2024, the number of employees is expected to be more than 7,000.

Zvezda will build tankers, gas carriers, drilling platforms, icebreakers and other ice class ships, providing Russia with a civilian fleet to develop offshore resources and expand operations through the Northern Sea Route between Europe and Asia. Last month the shipyard inked a deal with Atomflot to build the world's most powerful nuclear icebreaker.