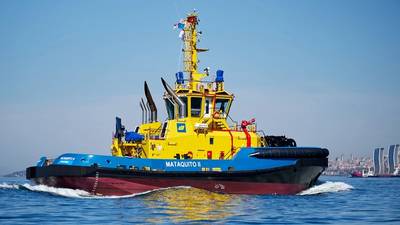 SAAM Towage received a new tug in Valparaiso, the Mataquito II, which passed its seaworthiness testing in Turkey, supervised by the crew that will operate it.

SAAM Towage Technical Manager Pablo Cáceres explained that “this tug allows safe and effective control of the maneuver in complex operations where it is necessary to assist ships at a speed of up to 10 knots, thanks to its installed capacity and electro-hydraulic control system of the forward winch.

The Mataquito II measures 29 meters wide and 13 meters in beam, and is certified with Escort and Fire-Fighting 1 class notation. It also has powerful engines that give it 82 tons of bollard pull and operates using a constant tension winch.

The tug was named after the Mataquito I, the first vessel ever built for the SAAM fleet, which operated from 1963 to 2013.

The Mataquito II also features a data acquisition system to obtain and transmit machinery operating logs in real time, which can later be transformed into performance and energy efficiency indicators for ongoing monitoring.