Sailing, Sailing, over the Grassy Waves 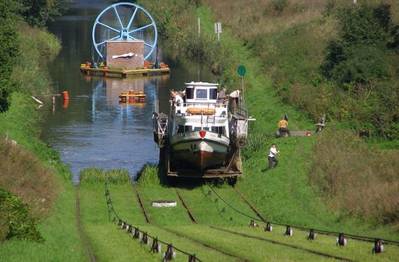 It is a tram or a train? Neither, it's a boat.
Pleasure craft using Poland's Elblag Canal can appear to be seen as sailing through grassy plains as they follow tracks on land in an unusual solution for dealing with elevation on the waterway.
The canal, approximately 240km (150 miles) north of Warsaw, uses a system of five inclined planes between its lakes, which are too steep to be navigated using locks.
Rail tracks run carriages to transport the boats.
The difference in elevation between the lowest and highest level is almost 100 metres (330 feet). The biggest plane has a rise of 21 metres and is 262 metres long; the smallest a rise of 13 metres.
Kaiser Friedrich Wilhelm II of Prussia commissioned the 80 km-long canal system, including the on land bit, to connect what was then East Prussia to the Baltic Sea.
It took 16 years to build and was completed in 1860. It was used to transport wood that was used in ships' masts. It is now used exclusively for tourism.