Saipem 7000 Returns to Work at Scottish Wind Farm after April Tilting Incident. Full Lifting Capacity to be Restored in 2023 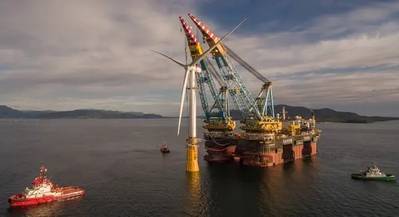 Italian offshore energy services company Saipem has confirmed the return to action of its giant crane vessel Saipem 7000, following a tilting incident in Norway in mid-April.
Offshore Engineer reported back in May that the 197.95 meters long Saipem 7000 would return to work at the Seagreen wind farm site offshore Scotland on or around May 31.

Two weeks later, the confirmation came from Saipem. The company said Monday: “Following the incident [that] occurred on April 14, 2022 to Crane n.1 of Saipem 7000, the vessel is back in operation and on May 31, 2022, the semi-submersible crane vessel, one of the largest crane vessels in the world, [...] arrived [at] the Seagreen wind farm [location] North of Edinburgh, Scotland.”

As previously reported, on April 14, Saipem 7000 tilted in a fjord in Norway with 275 people aboard. The vessel tilted during the planned 5 year main cranes load test, when, as Saipem said, the main block wire broke during the test lifting operation, and the testing load (two cargo barges) with the main block was released into the water. Nobody was injured during the incident.

Crane n.2 fixed. Full lifting capacity to be restored by 2023

In a statement on Monday, June 13, Saipem said: “After the incident, the vessel had gone through a first step of necessary repair works and the Crane n. 2 obtained the related certifications, allowing it to operate with a lifting capacity in line with Seagreen project technical requirements and scope of work.”

“The scope of work of the Saipem 7000 for the Seagreen Wind Farm is the installation of 114 foundation jackets; 23 of them have been already installed, while the remaining 91 will be installed from now until year-end 2022. Crane n. 1 is expected to complete the repair works to allow the vessel to return to its full lifting capacity by early 2023.

According to the vessel's specs sheet, the vessel's two main cranes are capable of lifting loads weighing up to 14,000 t in tandem mode.

The self-propelled vessel, one of the largest of its type in the world, can accommodate 725 people on board. It is used for installation and decommissioning work in both the offshore oil and gas and offshore wind industries. It was built by Fincantieri in 1987, VesselsValue data shows.

Videos appearing to show the moment of the incident have been shared on social media.

Worker Medevaced from Oil Platform in the Gulf of Mexico