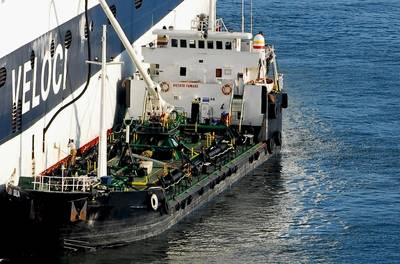 Italian refiner Saras is constructing a ship-refueling terminal at its Sardinia plant and will market a new, cleaner marine fuel ahead of a major regulatory change in 2020, its chief executive told Reuters.

From January 2020, the International Maritime Organization (IMO) will ban ships from using fuels with a sulphur content above 0.5 percent, compared with 3.5 percent now, in one of the biggest changes in the oil market in decades.

Refineries around the world have been gearing up for the switch by reducing output of high-sulphur fuel and upgrading plants to maximize production of the cleaner, more expensive fuel, which is similar to diesel.

Saras is investing in infrastructure that will allow ships to dock outside its 300,000-barrels-per-day Sarroch refinery in Sardinia to directly load ultra-low-sulphur marine fuel oil (ULSFO), in what is known as bunkering, CEO Dario Scaffardi said.

"Today, bunkering is based mainly on blending. In the Mediterranean you have Malta, where people bring different fuels and blend it. With the new specs, this (blending) will be very difficult to achieve for technical reasons so people like us, who will be able to produce directly the new fuel, will have the competitive advantage," Scaffardi said.

"With a small investment, we will have bunkering infrastructure and a lightering vessel and start selling locally fuels to expand the market."

The company did not disclose the size of the investment.

Saras, one of Europe's most modern refineries which also has a trading desk in Geneva, is developing its own ULSFO that the company will start marketing directly to shippers.

"This is a new line of business and we should be able to adapt to various market needs."