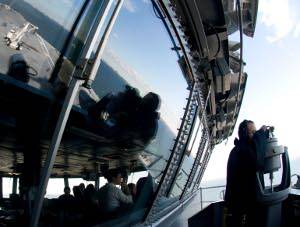 Carl Vinson immediately went to sea to conduct Sea Trials in preparation for its homeport transfer to San Diego.

Carl Vinson's Commanding Officer Capt. Bruce Lindsey said he thinks the crew did a great job bringing the ship out of the shipyard ahead of schedule.

"The crew did a fantastic job," said Lindsey. "Not only did we deliver during PSA, but we caught up on training we missed during RCOH and became the first carrier in 16 years to leave a commercial shipyard early."

Carl Vinson Sailors were relieved to have their ship become operational again, as some have been aboard for most of the time while in the shipyard. Vinson is the third nuclear aircraft carrier to have successfully completed 25 years of service and to undergo RCOH.

"When RCOH started there was nothing. The ship was completely gutted. It looked like bare metal with compartments," said Linenkohl. "Now it doesn't even look like the same ship. I'm very proud of all the work I put into getting this ship ready to go underway."

Carl Vinson's move to Norfolk is one step in her move to San Diego, which will be her homeport.

The short underway ended on Saturday, Dec. 5 with the ship pulling into Naval Station Norfolk. Carl Vinson is scheduled to transit around the Horn of South America and ultimately homeport in San Diego during the spring of 2010.