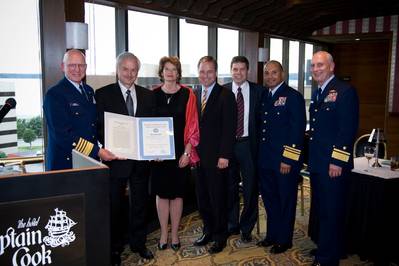 “I am very honored to announce the establishment of the Walter Joseph Hickel, Jr. Scholarship Fund,” said Robert J. Flynn, chairman, Coast Guard Foundation. “This fund will provide scholarship assistance for Coast Guard families stationed in Alaska. It pays tribute and will serve as a lasting legacy to the long and dedicated service of Wally Hickel’s support of the Coast Guard Foundation, as well as Coast Guard personnel and their families.”

The funds raised through the dinner helped build the Coast Guard Foundation Family Recreation Center in Kodiak, provided college scholarships for the children of enlisted personnel, provided education grants for enlisted Coast Guard members stationed in Alaska and provided many Shipmate Fund grants to units and cutters throughout the state.

The Scholarship Fund honors long-time Coast Guard Foundation director and Alaskan stalwart, Walter “Wally” Hickel, Jr. who joined the Coast Guard Foundation Board of Directors in 1994. In the ensuing years, he has helped raise nearly $2 million and contributed countless hours of volunteer time and personal resources to make the Foundation’s Alaska Awards dinner a premiere event.