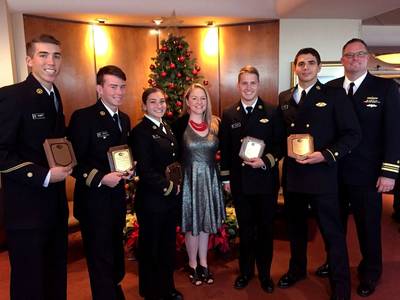 - Glass, from Johnstown, Pa., is midshipman first class studying maritime logistics and security. She previously served as the first rotation regimental commander and is the current Regimental Honor Board vice chairman of education. Glass was awarded accolades from the International Institute for Humanitarian Law in Sanremo, Italy, and the Carnegie Council for Ethics in International Affairs in New York City for her thesis on rules of engagement. Glass sailed aboard the Crowley-managed M/V National Glory during her sea term.
- Sexton, a midshipman first class from Vermilion, Ohio, is majoring in marine transportation. During his time at USMMA, he has been an integral member of the offshore sailing team, and has participated in major sailing events such as the Newport-Bermuda Race and the Marblehead-Halifax Race. During his senior year, Sexton has held various leadership roles within the regiment of midshipmen, including Regimental Waterfront Officer. After graduation, he hopes to sail as third mate aboard coastwise tankers as he advances his maritime career.
- Terselic, a midshipman first class originally from Tijeras, New Mexico, completed his at-sea semester aboard the Crowley-managed M/V Ocean Giant, as an engine cadet, where he furthered his maritime knowledge beyond any other vessel he sailed on. He is a four-year varsity athlete and captain of the men’s swim team.
Evans, a USMMA midshipman first class from Anchorage, Alaska, is studying marine transportation. He served as the regimental executive officer and president/founder of the Climbing and Outdoor Recreation Club. After he graduates in June, he plans to begin a maritime career with a third mate’s license.
- Rabbitt, from Easton, Md., is a midshipman second class majoring in maritime logistics and security. He served as a cadet onboard various commercial and U.S. military vessels that were providing the U.S. Air Force with prepositioned ammunition stocks, conducting underway replenishments and providing support for the 6th Fleet Command in the Mediterranean Sea. After graduating, Rabbitt wants to earn a commission as a pilot in the U.S. Navy.
- Chiappe, a midshipman second class from Granbury, Texas, is studying marine transportation. He is a snare drummer in the Band Company and wrote and organized the program, drill, visual effects, and drum feature for the Regimental Band’s Beat Retreat Ceremony. This past summer, he completed a two-week internship with U.S. Navy Training Squadron VT-21, totaling more than 20 hours of flight time in T-45 Goshawks. Upon graduation, Chiappe hopes to serve as a Navy pilot before joining a commercial maritime fleet.