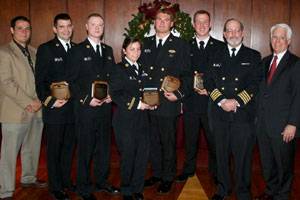 In an effort to ensure the next generation of career mariners is the best in their fields, Crowley presented four exemplary United States Merchant Marine Academy students with Thomas B. Crowley, Sr., scholarships Monday at the Containerization & Intermodal Institute's (CII) annual Connie Awards luncheon in Newark, N.J.

The event, attended by approximately 300 guests, provided the backdrop for the scholarship presentations to Midshipmen Patrick Showell, Donald ("Buddy") Finnie, Joseph Gaudiano and Bradford Lawhon. Laura Ladd was also recognized during the event as the recipient of the Richard A. Simpson scholarship - formerly named the Containerization and Intermodal Institute (CII) scholarship.

The grants further highlight Crowley's commitment to education, particularly for those studying in maritime related fields and business disciplines such as accounting, finance, and human resources. Over the years, Crowley has provided more than half a million dollars in scholarships to students in the United States, Central America and the Caribbean. Crowley Chairman, President and CEO, Tom Crowley Jr., continued and renamed the scholarship program in 1994 for his father, Thomas B. Crowley Sr., who guided the company to extraordinary heights before passing away.

Crowley has provided scholarship aid to USMMA students since 1993. To qualify, students must demonstrate scholastic achievement, leadership skills, initiative, teamwork, a history of community involvement and a desire to make a career in the maritime industry. The recipients are chosen each year in the spring and fall by the academy but aren't formally recognized until December. Crowley also extends formal internships when possible as an additional benefit to the scholarship recipients.

This year's USMMA recipients are a distinguished group.

Showell, a senior at the academy, is majoring in marine operations and technology and is expected to earn a bachelor's of science degree, a third mate unlimited tonnage ocean license, a qualified member of the engine department endorsement and a commission in the United States Navy Reserve.  A native of Sweetwater, N.J., he is the oldest of three children and comes from a family of service. His father, Timothy Showell, is a sergeant at the Atlantic County Sherriff's Department and his mother, Cecelia Showell, is an aide for Atlantic County Special Services School District.  A member of the offshore sailing team, Showell has raced in several world championships, earning a third place at the Sonar Worlds and has participated in open ocean distance races.  He is currently captain of the USMMA sailing team and skipper of a Farr 40.  In the future, Howell hopes to work in the salvage industry.

Finnie, a logistics and intermodal transportation major from Wylie, Texas, is in his senior year at the USMMA. In his time at the academy, Finnie has become a member of the football team and served as squad leader within the regiment of midshipmen. As a cadet, Midshipman Finnie has sailed with U.S.-flag carriers and the Military Sealift Command. Finnie has also completed an internship with a U.S. Gulf-based towboat company, and would like to sail the brown water after graduation.

Gaudiano, also a senior at Kings Point, realized his interest in towing after his internship with a towboat company in Baltimore, Md.  Soon after that experience, Gaudiano joined the academy's power squadron, a group that maintains and operates donated power vessels to the academy.  Gaudiano rose in rank quickly at the waterfront assuming the command of the Mariner, the academy's flagship, in only six months.  During his senior year, this exemplary student was appointed the regimental waterfront officer, the midshipman in charge of all waterfront activities.  During his sea year, Gaudiano sailed on the Washington Express and the Coast Range of the Crowley fleet, and continued to spend his summers interning with the towboat company in Baltimore. His goal is to continue sailing following graduation.

Lawhon, a senior, is majoring in logistics and intermodal transportation and upon graduation will earn a bachelor's of science degree, along with a U.S. Coast Guard third mate unlimited tonnage license and a commission as an ensign in the United States Naval Reserves. During his assigned sea year at the USMMA, he traveled abroad in a variety of locations, including the Far East, northern Europe, the Mediterranean and northern Greenland. Additionally, Lawhon completed an internship with Crowley in Ft. Lauderdale, Fla., where he was able to utilize his logistics education. In high school, he was an honor student and was recognized for perfect attendance from the first through the 12th grades. Lawhon attended a senior military college after high school where he was a member of the North Georgia Corps of Cadets. He received senatorial nominations to attend many of the nation's federal service academies but ultimately chose Kings Point. Lawhon plans on having a career in the towing sector.

CII's scholarship was renamed the Richard A. Simpson scholarship following the passing of Simpson earlier this year.  He was a long-time Crowley executive and a member of the CII board serving as either chairman or president for over 20 years.  Simpson founded the CII scholarship program in 1992.