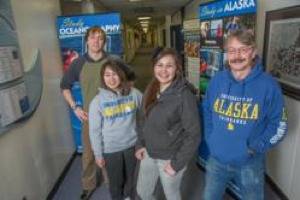 Four University of Alaska Fairbanks students began spring classes this week with their semester financially covered thanks in part to $10,000 in Thomas B. Crowley Sr. Memorial Scholarship grants. UAF students Rodney Hobby, Lucas Stumpf, Maggie Ann Beans and Amber Jones, who were chosen for having outstanding academic records and meeting other scholarship criteria, each received $2,500 toward their tuition.

Since 1984, Crowley has provided more than half-a-million dollars in scholarship funding for more than 275 students studying at maritime academies and other select institutions in the U.S., Alaska, Puerto Rico and Central America.

Hobby is working toward a major in biology at UAF’s School of Fisheries and Ocean Sciences. He recently worked as a seasonal technician on a migration project for the Cook Inlet Aquaculture Association (CIAA) collecting data for future forecasts of salmon migrating to the area.

Stumpf is also a student in the UAF School of Fisheries and Ocean Sciences and is studying for a bachelor’s degree in fisheries with a minor in marine sciences.

Beans is a freshman at UAF who is working toward a degree in electrical engineering.

Jones is a freshman in UAF’s nursing program, but her hard work in high school earned her sophomore credits. She is currently applying for internships at local hospitals and study abroad nursing programs.