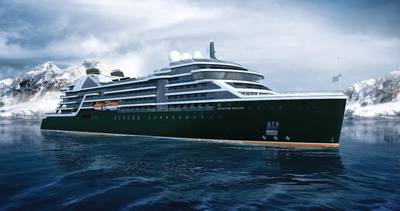 Cruise line Seabourn has announced that it will name its first new ultra-luxury purpose-built expedition ship Seabourn Venture. The newbuilding is scheduled to be launched at Mariotti Damen Cruise yard in Italy in June 2021.

The cruise line said the name is paying tribute to the remote destinations visited by the brand’s expeditions and Ventures by Seabourn excursion programs and the places yet to be explored in the future.

Seabourn began offering expedition experiences during its first sailing to Antarctica in 2013 led by a highly qualified, world-class expedition team and those itineraries have been offered every season since.

The success of the Antarctica program opened the door for similar optional experiences under the name Ventures by Seabourn featuring Zodiacs, kayaks, and guided hikes offered on Seabourn ships in a number of desirable destinations around the world, including Alaska, Australia & New Zealand, South America, and Northern European destinations such as Norway and Greenland.

"The name Seabourn Venture is an exciting step in the process of launching even more immersive voyages designed specifically for the expedition traveler who dares to go beyond the norm in terms of destinations and experiences they seek," said Richard Meadows, president of Seabourn.

"Combined with the team of 26 experts that will bring the expedition experience to life, we are going to draw on our pedigree to deliver breathtaking experiences and I know Seabourn Venture is going to create lifetime memories for the adventurer that wants to go farther, into more remote destinations than they may have ever seen before, in true Seabourn ultra-luxury," he added.

Seabourn Venture is scheduled to launch in June 2021, with a second yet-to-be-named sister ship slated to launch in May 2022. Both ships will be designed and built for diverse environments to PC6 Polar Class standards and will include a plethora of modern hardware and technology that will extend the ships global deployment and capabilities.

The new ships, which are being built by T. Mariotti, will be a brand new innovative design, created specifically for the ultra-luxury expedition traveler, and will include many features that have made Seabourn ships so successful. A new and exciting offering will be two custom-built submarines carried onboard, providing an unforgettable view of the world beneath the ocean's surface.

The ships will also be designed to carry a complement of kayaks and 24 Zodiacs that can accommodate all onboard guests at once, which will allow for a truly immersive experience. Each ship will feature 132 luxurious oceanfront veranda suites. More details and full-color renderings of the ship and its interior spaces will be released in the months ahead.