More than 400,000 Seafarers Are Still Stuck at Sea 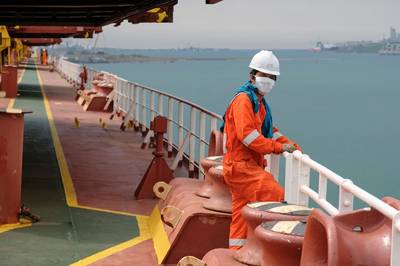 The number of mariners stranded on ships at sea is steadily rising as the crew change crisis brought on by the coronavirus pandemic continues with no end in sight.

Travel and transit restrictions in place due to COVID-19 have severely impacted seafarers, the number of crew members whose contracts have been extended by several months has continued to rise despite multiple pleas to governments to designate them as essential key workers and to facilitate their travel.

According to the International Maritime Organization (IMO), some 400,000 seafarers from across the globe are now stuck on vessels, continuing to work but unable to be relieved, in a deepening crisis which threatens trade and maritime safety. Some mariners have now been at sea for 17 months without a break, well beyond the 11-month limit set out in the Maritime Labor Convention (MLC). Besides the 400,000 seafarers stuck at sea, another 400,000 are unable to join ships.

During a high-level event on the margins of the United Nations General Assembly, Thursday, Captain Hedi Marzougui, who was in command of a vessel between December 2019 and May 2020, appealed to governments to act to allow seafarers to come home.

"Not knowing when or if we will be returning home brings a severe mental toll on my crew and myself," Marzougui said. "I would encourage each and every one of you to think of how you would feel, if you had to work every day, for 12 hours, with no weekends, without seeing your loved ones, and trapped at sea. Now add that you have to do that with no idea of when you will be repatriated."

"Overly fatigued and mentally exhausted seafarers are being asked to continue to operate ships," Lim said. On more than 60,000 cargo ships which continue to deliver vital goods, foods and medicines, ship safety is hanging in the balance, just as seafarers' lives are being made impossible. The safety of navigation is in peril."

Secretary-General Lim restated his plea to governments: "Action is needed – and is needed now. We all depend on seafarers. They should not be the collateral victims in this pandemic. Seafarers deliver for us, and now we need to deliver for them."

In a statement read out at the event, to mark World Maritime Day 2020, UN Secretary-General António Guterres reiterated his concern for seafarers stranded at sea. He renewed his appeal to governments "to address their plight by formally designating seafarers and other marine personnel as 'key workers', ensuring safe crew changes and implementing the protocols developed by UN agencies, as well as the International Chamber of Shipping and the International Transport Workers' Federation, allowing stranded seafarers to be repatriated and others to join ships."

In a letter issued to the UN Secretary General, the CEOs of 30 Consumer Goods Forum companies, including Unilever and Danone, have called on governments to designate seafarers as "key workers" and raised strong human rights concerns, stating: "the situation has also inadvertently created a modern form of forced labor".

Unilever's Chief Supply Chain Officer Marc Engel said COVID safe crew changes were needed without delay. "When the ships stop, so does everything else. We are now close to an entirely avoidable breaking point which could ripple out through the economy. Even a temporary interruption could push companies and countries over the edge," he said. Henriette Hallberg Thygesen, VP and CEO, Fleet and Strategic Brands at A.P. Moller-Maersk echoed the call for words to be followed by action.

Sanda Ojiambo, CEO and Executive Director of the UN Global Compact, the world's largest corporate sustainability initiative, encouraged businesses to call on governments to end the labor abuses that seafarers are suffering, noting that the Ten Principles of the UN Global Compact represent pillars of responsible business which "are connected to the humanitarian, economic and safety crisis unfolding on our seas."

Both Guy Platten, Secretary-General of the International Chamber of Shipping (ICS) and Stephen Cotton, General Secretary of the International Transport Workers' Federation (ITWF) called on governments to intervene to end the crew change crisis, warning the numbers of seafarers impacted would only continue to increase without coordinated action by governments.

Transport and maritime ministers from Canada, France, Kenya, Panama and the Philippines also addressed the virtual event, urging other governments to join them in designating seafarers as essential workers, implementing measures for safe crew change and facilitating COVID-safe transit for seafarers.

When Captain Will Whatley guides a ship through Arctic waters, he is starkly aware of what can go wrong.Double the manpower is needed to navigate.