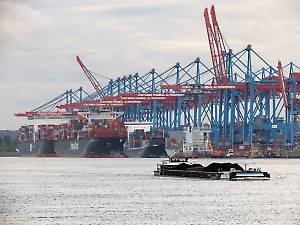 Barge traffic at the Port of Hamburg

The Port of Hamburg, along with the other German seaports, is calling for appropriate recognition in the Federal Transport Infrastructure Plan.

“When the new Federal Transport Infrastructure Plan is agreed this year, the forecast growth in freight traffic makes it essential that maintenance and expansion of routes to the seaports is given top priority,” said Ingo Egloff of Port of Hamburg Marketing’s Executive Board.

To ensure accessibility from the North Sea, a decision by the courts on the implementation of the widening and deepening of the navigation channel on the Lower and Outer Elbe is urgently needed this year. “Along with international shipping companies and port customers, we have already waited far too long for the start of dredging,” Egloff said.

In 2014 ultra large containerships made 507 calls in Hamburg. “So we had around 24 percent more calls by containerships with slot capacities of over 10,000 TEU than in the previous year. Even the most obstinate opponents of modification of the channel must slowly recognize that to re-route such a large number of ocean-going ships to other ports would be by no means simple. Not to speak of the appalling environmental consequences of shifting cargo traffic from oceangoing ships on to hundreds of trucks,” Egloff added.

A rise of over 50 percent in seaport-hinterland traffic will decisively shape the growth in total freight traffic forecast for Germany in the years to come. Against this background, in Egloff’s view transport routes to the seaports must rate top priority in the new Federal Transport Infrastructure Plan. For Egloff, functioning transport routes properly equipped to handle further volume growth are a guarantee for smooth supplies for the country’s industry. These are also in the interest of the national economy as a whole.

“Around 260,000 jobs throughout the country, 110,000 of them outside the Hamburg Metropolitan Region, are directly or indirect related to the Port of Hamburg. Countrywide added value of almost 20 billion euros means that the Port of Hamburg’s significance extends far inland,” Egloff said. If such  infrastructure projects as the building of a new Y-shaped rail link situated between Hamburg/Bremen and Hanover, or the upgrading of the A20 and A21 autobahns, are ever to be implemented, then in his view the states of Northern Germany need to pull together, the port stressed, adding, that will be essential for any successful positioning at the Federal Government in Berlin of their essential transport projects. The same applies to the inclusion of other transport measures in the Federal Transport Infrastructure Plan.

In Egloff’s view, action is also urgently required, for example, on the repeatedly delayed finalization of the Elbe Concept for inland waterway shipping. Latest reports suggest that this has been shelved until 2017. “It is unacceptable that inland waterway shipping in our country should operate only on the Rhine and in the West, with the Middle and Upper Elbe remaining neglected and under-developed as a waterway. We cannot afford to completely overlook existing transport infrastructure that would be useful for coping with increasing volumes requiring transport, or to ignore this in planning transport routes. Egloff therefore demanded that “Due classification of the Elbe and its adjacent river/canal system, as well as the continuation of maintenance and expansion measures, really belong on the agenda if the Elbe ports are to be able to discharge their function as multimodal transhipment points for the national economy.”

In Egloff’s opinion, even a transfer of transport chains involving inland waterway vessel will only become feasible if the Elbe inland waterway from Hamburg to the Czech Republic can at long last offer a median channel depth of 1.60 meters on 345 days in the year. On eight out of nine sections of the Middle and Upper Elbe, channel depth has not yet reached the 1.60 meters that have been promised by the Federal Government, but is only 1.18 meters or 1.38 meters. Egloff said this is insufficient for handling regular services by inland waterway vessel. Speaking for his organization and its member companies, this member of Port of Hamburg Marketing’s Executive Board argued for the creation of an Overall Elbe Concept. Fundamentally, he welcomes the attempt to reconcile economic and ecological interests in such a plan.