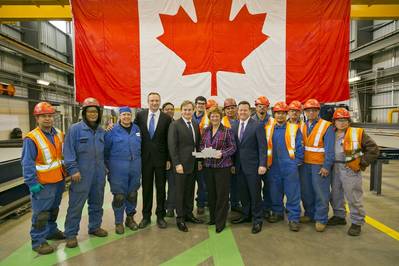 “We are thrilled to begin initial block construction on the OFSV and are grateful that Minister Finley is here to celebrate this milestone moment with us," said Brian Carter, President – Seaspan Shipyards. “We are proud to be Canada’s capability partner for Non-Combat vessels and are looking forward to continuing our service to the Canadian Coast Guard and the Royal Canadian Navy under the NSPS.”

The initial block construction coincides with the final phases of Seaspan’s Shipyard Modernization Project, a two-year, $200 million project, which once complete in November, will provide state-of-the-art facilities to efficiently deliver ships under the NSPS program for more than 20 years.

“Today’s announcement confirms that the NSPS is working to employ Canadians and generate economic opportunities within our shipbuilding and marine industrial base across the country,” said Brian Carter.

Seaspan’s NSPS build package will create stable work over the next decade for trades and suppliers throughout B.C. and across Canada. It is estimated that this work will create a total of 5,000 direct, indirect and induced jobs throughout the life of the build program, and produce almost $500 million per year in gross domestic product for B.C.’s economy.