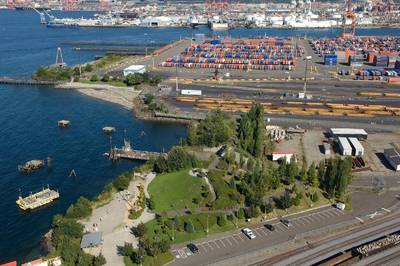 A coalition of environmental groups has sued the Port of Seattle over a leasing agreement to host Shell Oil’s Arctic drilling fleet, claiming the deal was negotiated in secret and may pollute the port.

They argued that the port needed to allow more public involvement and violated two state laws.
The Port of Seattle earlier this month signed a two-year lease for 50 acres across from downtown Seattle to Foss Maritime, the company that will manage Shell’s drilling fleet here in Seattle at Terminal 5.
That terminal has been empty since last summer because the port is planning to overhaul it to allow bigger cargo ships. So this is a temporary use to generate about $13 million.
The groups allege that the port violated state environmental laws when it did not do a review. The groups including Sierra Club, Puget Soundkeeper and Seattle Audubon Society say the port violated state environmental laws by not doing a full assessment of the impacts of putting the Arctic drilling vessels here.
The lawsuit filed in King County Superior Court also names port commissioners and Foss. The lawsuit says the port violated state environmental laws when it did not do a review before signing the lease. The lawsuit asks the court to vacate the lease.
Port of Seattle CEO Theodore Fick has said that the lease complies with environmental regulations and will bring in about $13 million in rent over the two years. Eight vessels would be moored at the terminal.
If this suit actually holds water, it could have serious national implications, coalition spokesperson Kenan Block says.
"The port voiding this lease is not only the right thing to do locally, in terms of its impact, but would send the same sort of message [as passing] the $15 minimum wage last year," Block says. "It wasn’t just a local story—it had an impact across the country."