US Secretary of the Navy Concludes Official Australia Visit 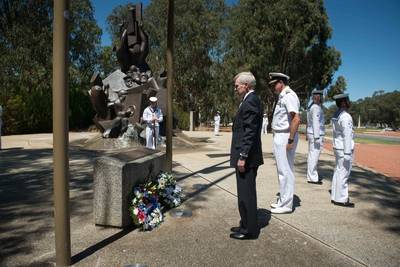 Traveling to both Brisbane and the Australian capital Canberra, Secretary of the Navy Ray Mabus met with U.S. and Australian government and military officials to reinforce the alliance between the two countries.

Mabus' visit represents a continuation of the Department of the Navy's focus on building partnerships designed to help distribute the burden of securing the global maritime domain based on alliances, shared values and mutual trust.

"The United States and Australia have an historic and extensive relationship, one that has been an anchor of peace and stability in the Asia-Pacific region," said Mabus. "From exercises like RIMPAC and Talisman Saber to personnel exchanges at sea and ashore, our countries operate together cooperatively and seamlessly to enhance global and regional security, while building on shared experiences and strengthening our partnership."

In Brisbane, he met with the Australian Army's First Division leadership, the command responsible for the Joint Deployable Force Headquarters that oversees large-scale amphibious operations and training activities.

While in Canberra, Mabus met with Australian Minister of Defense David Johnston, Secretary for Defense Dennis Richardson, Chief of Defense Force Gen. David Hurley, and Chief of Navy Vice Adm. Ray Griggs, and members for their staffs where they discussed regional relationships, fleet operations and shipbuilding, and energy initiatives.

In addition to meeting with officials, Mabus participated in a wreath-laying ceremony at the Royal Australian Naval Memorial, Canberra, which honors sailors who have served in defense of their country.