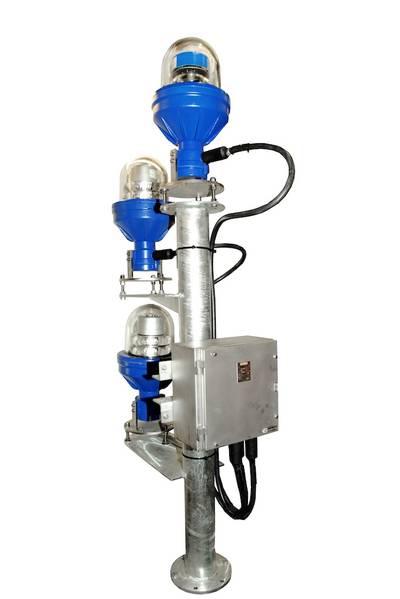 The Solan oil platform in the British sector of the North Sea will be protected by Tideland Signal's Syncrolan LED light and fog stations.

Wärtsilä awarded Tideland Signal the contract to equip the new Solan oil platform in the British sector of the North Sea with a completely decentralized warning system in which each light/fog station is equipped with its own control panel, local power supply and battery bank, all certified for Zone 1.

The light stations consist of an MLED-180HI EX LED main light with a range of 15 NM and an MLED-150 EX LED secondary light with a range of 10 NM plus an MLED-150EX red subsidiary light. Fog warning is supplied by AB68EX main and secondary fog signals linked to an EX-Sentry fog detector, allowing full automatic operation. The fog detector activates the fog signal automatically when visibility falls below a preset norm.

The central monitoring panel provides monitoring and alarm indications including light and fog signal failure as well as low voltage and charger alarm which are sent to the on-shore monitoring room using Modbus communication. Important advantages of the decentralized configuration are the increased integrity of the system and the space saved within the central areas of the platform.

Safety of operation in the presence of a flammable atmosphere is assured by the fact that Tideland supplies only fully certified Hazardous Area Equipment designated as suitable for use within a Zone 1, hazardous area.

The Solan facility will not be manned permanently but will be operated remotely from the Onshore Control Room located in Aberdeen. Communication between the offshore platform and onshore control room will be maintained via satellite links.

The Solan field lies in 135m deep waters west of the Shetland Islands. It is operated by Premier Oil which holds a 60% interest while Chrysaor owns the remaining 40%. The $850 million project will include four subsea wells tied-back to a processing deck and a subsea storage tank from which oil will be offloaded to shuttle tankers.

First production is expected in late 2014 at a rate of approximately 24,000 barrels of oil a day. The field has an estimated life of 20 years during which it is expected to produce more than 44 million barrels of oil. After the first year, the facilities will not be permanently manned.