This Day In Naval History: September 13 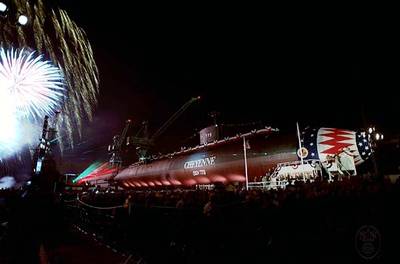 1803 - Commodore John Barry dies at Philadelphia, Pa., having served in numerous commands and over vessels in the Continental Navy during the American Revolution and in the newly formed U.S. Navy.

1814 - During the War of 1812, the British bomb Fort McHenry at Baltimore Harbor for 25 hours. The sight of Fort McHenrys flag and the British withdrawing from Baltimore the next morning inspires Francis Scott Key to write the Star Spangled Banner.
1847 - During the Mexican-American War, Chapultepec - the gateway to Mexico City - is successfully stormed by Marines. The next day they are assigned to duty as guards to the National Palace, called the Halls of Montezuma. This action inspires the first line of the Marine Hymn.
1906 - Sailors and Marines from USS Denver (Cruiser #14) land in Havana at the request of the Cuban government to preserve order during a revolution.
1944 - USS Warrington (DD 383) sinks off the Bahamas in a hurricane. After a prolonged search, numerous Navy vessels rescue only five officers and 68 men of the destroyer's 20 officers and 301 men.
1996 - USS Cheyenne (SSN 773) is commissioned at Naval Station Norfolk. The 62nd and last of the Los Angeles-class attack submarines, USS Cheyenne is the third to be named after Wyomings capital city. The boat is homeported at Pearl Harbor, Hawaii.
2008 - Hurricane Ike hits Galveston and Houston, Texas. At Galvestons Seawolf Park, a maritime museum, the museum ship USS Stewart (DE 238) and museum submarine USS Cavalla (SS 244), suffer damage as they are thrown out of the water onto land. Both vessels are restored to the prior locations and undergo renovations.
(Source: Naval History and Heritage Command, Communication and Outreach Division)