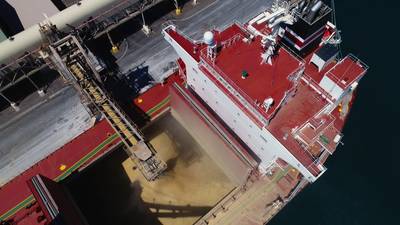 Seven more ships laden with agricultural produce left Ukrainian ports on Sunday, the country's infrastructure ministry said, bringing the total to 218 since a U.N.-brokered corridor through the Black Sea came into force at the start of August.

Ukraine, a major agricultural producer, was left unable to export through the Black Sea after Russia's invasion on Feb. 24 until the agreement of the grain deal, which promises safe passage for ships carrying crops.

In a post on Facebook, the ministry said this brought the total amount of agricultural produce shipped through the corridor to 4.85 million tonnes.

"On September 25 ... 7 ships with 146.2 thousand tons of agricultural produce for countries in Africa, Asia and Europe left the ports of Odesa, Chornomorsk and Pivdennyi," the ministry said.

Ukraine shipped up to 6 million tonnes of grain per month before the war.