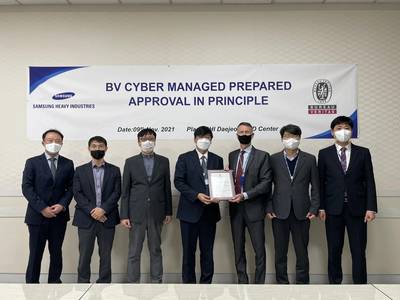 The certificate was delivered to the Vice President of SHI, Hyun Joe Kim, by the Chief Country Executive of BV Korea, Christophe Capitant, at a ceremony on SHI R&D Centre in Daejeon, Republic of Korea. Image courtesy BV

The certificate was delivered to the Hyun Joe Kim, Vice President of SHI, by Christophe Capitant, Chief Country Executive of BV Korea, at a ceremony on SHI R&D Center in Daejeon, Republic of Korea.

SHI has received the AiP for its SVESSEL smart ship solution, which focuses on complete digitalization of the ship and its applications. BV’s Cyber Managed Prepared notation confirms the design’s compliance with the industry’s best practices and IMO 2021 requirements in terms of cyber security. SHI's cyber security technology has already been proven and deployed on a number of ships built by the shipbuilder.