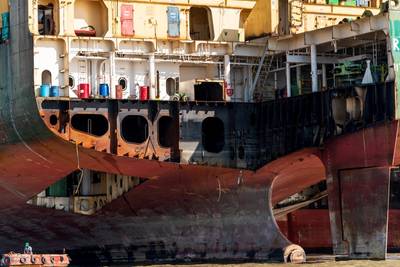 The degraded performance across the ship recycling sector over the last few (and painful) months shows few signs of abating just yet, as it has been a veritable tale of misery, even though prices remain at some of the firmest levels we have seen over the last decade. Down from the peaks of $700/Ton, levels nearly $100/LDT lower have left a bad taste in most mouths in the industry.

Certainly, the last time prices crashed from the psychological $700/LDT barrier was back in 2008, when even %800/LDT was briefly breached during the unprecedented boom years of the shipping industry, prior to the global financial collapse in September of that year.

However, not for a while have we seen freight rates at such optimistic numbers, as all sectors (Dry Bulk, Tankers and Containers) continue to fly, giving a healthy collection of these aging ladies, an extended chance at life in their respective global trading fleets.

As such, it remains a bit of a conundrum for the ship recycling sector, while candidates remain sparse and their incoming volume unlikely to pick up any time soon, even with prices having declined by over $100/LDT and having left sentiments on the ground in pieces, levels of over $600/Ton seems insufficient to tempt vessels towards the shores of recycling.

Steel prices have actually recovered a little in Pakistan, as they stabilize in India to an extent, ending the week at levels similar to those at the beginning of the week. However, it is the currency that continues to afflict Recyclers globally and this is leading to an overall lack of confidence in offering afresh on tonnage. Perhaps a period on the sidelines could reinvigorate sub-continent markets and bring demand back, of course, once steel prices and currencies settle at an acceptable level.

On the far end, Turkey manages to finally wrest the unending slide of nearly 6+ weeks that has seen levels plummet about $250/MT, as both import and local steel plate prices record improvements of their own.