Remontowa Shipbuiding, a member of Remontowa Holding, in Gdansk Poland delivered some impressive and innovative vessels in 2020. In October the third in a series of four electric hybrid ferries for a Norwegian customer, began sea trials, and the fourth dual-fuel (LNG/Diesel Electric) ferry for British Columbia was under construction; sophisticated vessels were built and delivered to foreign buyers.

On the domestic front, the yard has also been busy, too. A pair of vessels were delivered to the Polish Maritime Authorities in Szczecin and Gdynia. These 60.1 x 13.4-m, multi-purpose vessels replaced a pair of aging boats.

Poland’s history in maritime research continues with the delivery of the two multipurpose vessels. The diesel-electric powered craft have as many capabilities as a Swiss army knife. In addition to servicing Polish navigational aids and ice breaking, they are equipped for towing ships in emergencies. A major focus of their work is in conducting hydrographic research on water quality and depth contours. They are equipped with remotely controlled fire monitors atop the bridge for fighting vessel fires. Both vessels carry the class notification allowing operations to 200 nautical miles offshore.

The first hull, with a six-meter molded depth, was launched from the shipyard at Gdańsk in July, 2019 while the second followed in October, 2019. Both vessels were finished alongside at the shipyard. The vessels are fitted with three 1350 kWe generators each powered by an IMO Tier III compliant Cummins QSK50 diesel that will turn at 1800 RPM. The green technology has been well proven on offshore support vessels where, depending on work and power demand, the ships can operate on one, two, or three generators.

The 350 DWT vessels, named Planeta 1 and Zodiak II, have a speed of 13 knots. Accommodation is provided for up to 21 crew and researchers. Design of the two craft was developed by Remontowa Marine Design & Consulting, a member of Remontowa Holding. 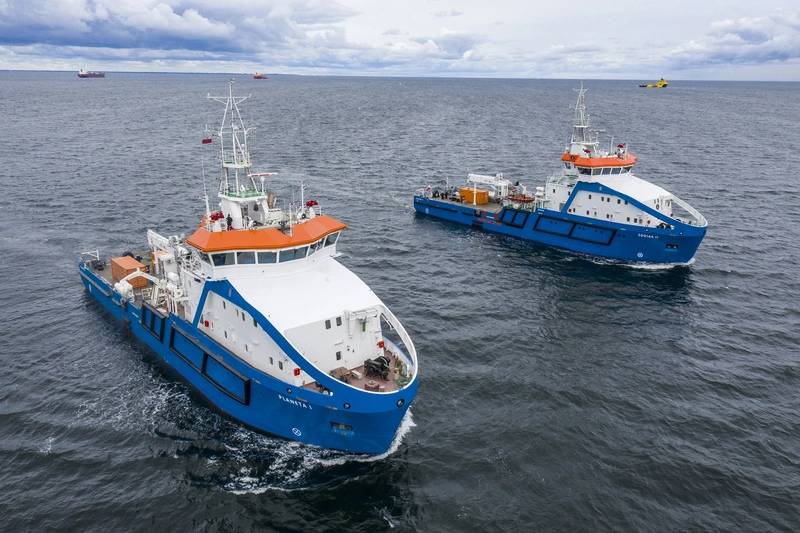