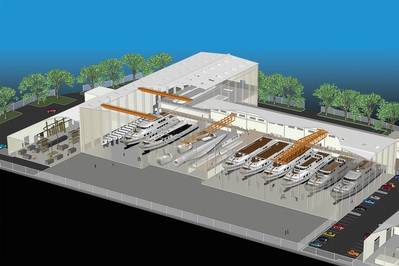 West Coast U.S. shipbuilding and repair powerhouse Vigor has selected a Vancouver, Washington site to be the home for its new  all-aluminum fabrication facility.

With a nearly billion dollar contract in its hip pocket to build the U.S. Army’s new landing craft over the next 10 years, Vigor is expanding it's shipbuilding operations to a new state-of-the-art aluminum fabrication facility with this project serving as the anchor for production.

The facility as formerly the home of Christensen Yachts, deemed by the company as the best location to build the U.S. Army’s new landing craft, Maneuver Support Vessel (Light) or MSV(L).

Vigor expects to eventually employ approximately 400 workers at the site and will be investing millions in capital upgrades and equipment.

“The synergies we will achieve by bringing these amazing builders together in one location strengthens our competitive advantage and builds upon our long-term goals as an outstanding industrial company,” said Frank Foti, Vigor President & CEO. “While we’ve had operations in Vancouver since 1980, this move represents a substantial increase in the number of Vigor employees who will be living and working here."

Vigor looked in both Oregon and Washington state at building and buying options for this facility. Local, state and federal leaders in both states showed support throughout the process, demonstrating their commitment to the economic benefits and jobs created by strong manufacturing and maritime sectors in the Pacific Northwest. The fact that the Vancouver site brings its entire aluminum fabrication team together in one location was a primary driver coupled with the livability of the community, its proximity to existing Vigor facilities, and the excellent suitability of the Christensen facility for Vigor’s production needs.

In addition to the Army landing craft production, other programs to be constructed at the site will include ongoing production of the Combatant Craft Medium (CCM) for the U.S. Navy as well as for U.S. allies, the Response Boat-Medium (RB-M) for the U.S. Coast Guard and export market, Vigor’ Fast Interceptor, aluminum fast ferries and commercial workboats. Vigor’s aluminum marine work is currently performed primarily in Seattle (Ballard), WA and Clackamas, OR. Aluminum marine work in these locations will phase out as work is moved to the Vancouver site over the coming year.

The approximate timeline is to begin production at the facility in May with existing work followed by the beginning of construction of the MSV(L) prototype in the summer. Once the MSV(L) prototype is completed and testing and refinements have occurred, the schedule calls for four vessels in the Low Rate Production phase, followed by 32 vessels once Full Rate Production is underway.