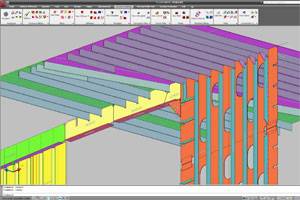 ShipConstructor Software Inc. (SSI) announced the release of the R4 version of ShipConstructor 2008, an AutoCAD-based ship production design software. In addition to many production-focused improvements, the new version includes an enhanced user environment thanks to AutoCAD 2009 compatibility.

“We have introduced changes in key areas including pipe spool drawings, pipe bending output, and production output display options. The new Weld Catalog is a precursor to the ShipConstructor Weld module to be released in Quarter 2 of 2009, ShipConstructor allows engineering departments to communicate even more effectively with production than before”, said Darren Larkins, Chief Technology Officer at SSI.

ShipConstructor Pipe Spool drawings have been treated to a host of advanced features including the addition of advanced spool location and bending output tables. As part of a ShipConstructor production drawing, these tables are fully customizable and are linked to the 3D product model. This allows design changes to be automatically updated in previously generated production output without the loss of detailed user customization. In addition, new display options for pipe model, spool and arrangement drawings have been added, allowing customization of these types of deliverables for any shipyard. Life could not be easier.

The piping data is exported in a generic XML format, and the user can provide a transformation file (XSLT) to apply during export. This XSLT file, which is a standard web format, can be used to format the data in any way required. This makes the output suitable for pipe bending machines, pipe stress analysis tools and more without any further translation.