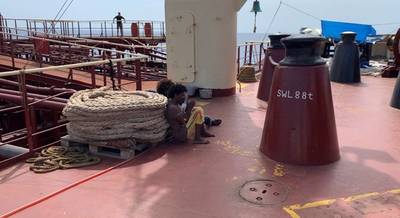 Several shipping industry executives have voiced their support for Maersk Tankers and are demanding government action to debark nearly 30 migrants from one of its tankers stranded off Malta.

Maersk Tankers said its operated tanker Maersk Etienne has been stuck at sea since August 4 when its crew rescued 27 migrants from a wooden dinghy that had been adrift for days. Maltese, Tunisian, Italian and Libyan authorities have denied entry, leaving the migrants to sleep on mattresses and blankets on board, some on the deck protected from the sun by makeshift shades.

"It’s deeply concerning that authorities have not come up with a solution for the 27 refugees, including a pregnant woman—rescued at the specific request of Malta and held on deck on the Danish flag vessel Maersk Etienne for a month under unacceptable living conditions—ignoring their plight and undermining the eternal obligations of good seamanship," said Robert Maersk Uggla, CEO of A.P. Moller Holding.

"The case sets a terrible precedent for the global merchant fleet and the Mediterranean trade lane. While our Group has rescued thousands of people over the years, we struggle to remember ever having a case, where a vessel and its crew have been left without support from authorities for so long. Not only is the industry dumbfounded by the inaction of relevant states, but Human Right Watch’s CEO [Kenneth Roth] has raised humanitarian concerns.

"While many of us acknowledge the challenging political considerations, we are desperately awaiting Malta and Denmark to find a solution for the refugees, with EU or other relevant parties, so the ship and its crew are released."

Others at Maersk, including Maersk Tankers CEO Christian M. Ingerslev and the ship's captain Volodymyr Yeroshkin have also called for immediate help as morale and onboard conditions deteriorate. Three migrants were rescued Sunday after they jumped overboard.

"It is really shameful what the authorities are doing to us. The crew did their job honorably. But the people we rescued are abandoned and the vessel is paralyzed. We need action," Yeroshkin said.

Now executives from other shipping companies have started to weigh in.

"We at Stena Bulk are closely following the development of the situation onboard the Maersk Etienne and all on board are in our thoughts," said Erik Hånell, President & CEO Stena Bulk.

"It is important that those in distress at sea can rely on others close by coming to their assistance and hopeful rescue. This is one of the fundamental rules at sea and something we as merchant shipping companies would never do differently. Therefore it is very important that we also can trust we get response from the relevant authorities to take over when the most acute situation is over.

"We join Maersk Tankers in their plead for urgent action from relevant authorities so that the 27 immigrants on board are safely disembarked and given the attention needed and Maersk Etienne is able to continue its journey."

Mikael Skov, CEO Hafnia, said, "Hafnia supports you 100%. It is tragic to see that both refugees and crew are left abandoned and helpless on board Maersk Etienne. The obligation to help those in distress is something we support wholeheartedly. People. First. Always. But a ship’s crew can only do so much. The relevant authorities need to take over to ensure the refugees receive the proper care they deserve. We hereby raise our voice in support of the refugees and Maersk Tankers, calling on the authorities to act urgently."

Ingerslev said, "My concerns go to the 27 people we rescued a month ago and our crew onboard who has fulfilled their moral and legal duty. It is concerning that relevant authorities have not found a solution so the people can get disembarked and get the care they need and our crew can continue their voyage safely."

"This situation is ridiculous," Hugo De Stoop, CEO, Euronav, wrote in a comment to Ingerslev. "Your crew acted not only as they should but in a very humanitarian way. You should all be considered Hero for saving lives and instead you get severely punished by not being able to continue your voyage. Authorities are demonstrating their incompetence."

"We support you fully," Franck Kayser, CEO Ship Management, V. Group, wrote to Maersk Tankers. "The situation on board the Maersk Etienne calls for politicians and governments to take immediate responsibility.

"While it is great to see the Danish government working hard to ensure the safety of the 27 refugees picked up by Maersk Etienne it is with a mixture of disappointment and frustration that we witness the situation.

"We are calling for governments to take actions and let the refugees on board Maersk Etienne come ashore and have their situation resolved by the proper authorities and let the captain and his crew commence their voyage."

The Maersk Etienne is at least the third merchant ship this year to become stranded while caring for migrants following rescues by the containership Marina in May and livestock Talia in July.