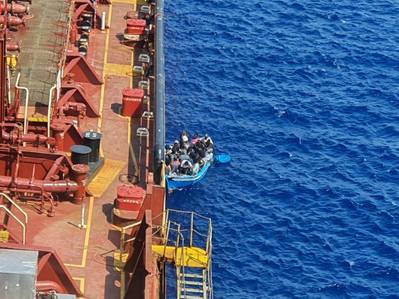 Three migrants were rescued off the coast of Malta on Sunday after they jumped overboard from a tanker that has been denied entry by several countries since a rescue operation a month ago.

The captain of the Maersk Etienne chemical tanker had warned last week that, while the migrants had no critical physical problems, the mental strain for those onboard was getting worse.

“The situation onboard Maersk Etienne escalated further this morning when three migrants jumped overboard,” a Maersk spokeswoman said on Sunday.

“The captain and crew were quick to implement recovery procedures and the three persons have now been rescued and brought back onboard the ship where they are being given due care,” she said.

The ship’s crew rescued 27 migrants, including one pregnant woman, on August 4 from a wooden dinghy that had been at sea for days and sank immediately after the rescue operation.

Maersk Tankers, the operator of Maersk Etienne said that neither the Maltese, Italian nor Libyan authorities would let them come ashore.

The migrants have been sleeping on mattresses and blankets, some on the deck protected from the sun by makeshift shades.