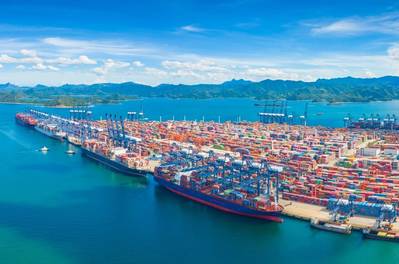 Major shipping companies have warned clients of worsening congestion at Shenzen's Yantian port in southern China following the discovery of several asymptomatic cases of COVID-19 in the city.

Yantian International Container Terminal (YICT), one of China's busiest container ports with an annual handling volume of more than 13 million twenty-foot equivalent units (TEU), has imposed stringent disinfection and quarantine measures since May 21 when the virus was discovered among port staff.

More than 40 container ships were anchored in open water outside the terminal, Refinitiv ship tracking data showed on Thursday.

Top international container lines said they would be skipping some port calls to Yantian to ease the pressure, while shipping sources added that some vessels may be re-routed to other destinations.

“The overall operation productivity at YICT has been adversely impacted, and we expect the current vessel berthing delays and port congestion situation will likely continue for at least a week,” the world’s no. 2 line MSC said in a customer advisory on Wednesday.

Global container shipping rates have climbed to record highs in recent months due to bottlenecks caused by a surge in demand for consumer goods.

Even before the disruption at Yantian, global supply chains were struggling to clear container backlogs, a knock-on effect from the week-long blockage of a major trade route through the Suez Canal in March.

Container freight rates from China to Europe touched a record high of $10,627 (per 40-foot container unit) this week.

Yantian port in late May temporarily suspended the acceptance of export laden container ships, leading to a heavy backlog in the container yard and congestion outside the port.

By the time Yantian partly resumed processing on Monday, more than 23,000 containers were waiting to be exported.

The world's leading container line Maersk warned in a letter on Thursday that congestion and delays could last 12 days, longer than its previous expectation of 7-8 days.

Maersk estimated operations in the eastern area of the Yantian terminal, where larger vessels mainly berth, would remain at around 30% of their normal level.

Other major shipping firms including COSCO Shipping , Hapag-Lloyd and ONE also alerted their customers to the growing delays and congestion and the possibility of not calling at Yantian.

"The local government is paying great attention to the disinfection measures at Yantian, as right now is the busiest season for exports and Yantian is one of the biggest transportation hubs for European and American lines," said a person close to Yantian port, who is not authorised to talk to media.

Shipping companies and Chinese authorities have advised vessels to divert to nearby ports, including Shenzen's west port and Guangzhou's Nansha port, which are operating normally despite sporadic cases of the coronavirus in the region.

"There are not as many (virus) cases in Yantian as the nearby cities. But more rounds of nucleic acid testing will need to be done. Thus it will take some time until the port resumes full operations," said the person close to the port.

Yantian port did not immediately respond to a Reuters request for comment.

Recently expanded YICT has become a critical gateway into China with around 100 vessels calling weekly, 60% of which operate on European and U.S. routes, according to a recent note from the regional Shenzen government.

(Reporting by Muyu Xu in Beijing, Jonathan Saul in London and Stine Jacobsen in Copenhagen, Additional reporting by Roxxanne Liu in Beijing)