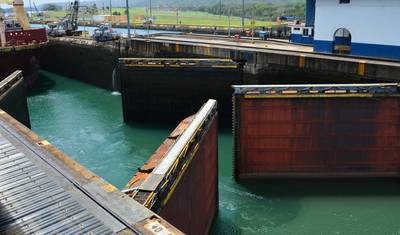 The Panama Canal will allow vessels coming from Venezuela to transit the waterway provided they present the necessary paperwork, the canal authority's chief said on Wednesday, suggesting a new round of U.S. sanctions on the South American country may not make any difference to canal traffic.

The measure did not explicitly place sanctions on non-U.S. firms linked to Venezuela, but it threatened to freeze the U.S. assets of any person or company determined to have "materially assisted" President Nicolas Maduro's government.

Asked if the Panama Canal would continue allowing vessels from Venezuela to transit the waterway following the latest U.S. sanctions, Panama Canal Authority chief Jorge Quijano told reporters that the waterway should not submit to pressure from third countries on the issue of whether or not vessels could use the canal, which connects the Atlantic and Pacific Oceans.

Panama earlier this year withdrew its flag from dozens of vessels linked to Iran and Syria. One of the tankers, the Grace 1, was later seized in Gibraltar's territorial waters on suspicion of violating sanctions, raising tensions in the Gulf, where Iran detained a UK-flagged ship in retaliation.
Panama's Maritime Authority last month said the country will continue de-flagging vessels that violate sanctions and international legislation, but the Canal has not refused passage to boats that comply with rules on the basis of neutrality.

Under international law, every merchant ship must be registered with a country, known as its flag state, which is responsible for safety and the crew's working conditions. When a vessel loses its flag, it typically triggers loss of insurance and classification if it does not immediately find another flag.

Quijano said the Canal expects to move 460 million tonnes of freight in the 12 months through September, above its original projection of 450.7 tonnes. For the 2020 fiscal year, it plans to help move 493.2 million tonnes.
The Panamanian-run waterway also is closely monitoring trade tensions between the United States in China, which led to a gap in the canal's projected revenue since China stopped buying U.S. liquefied natural gas, he said.