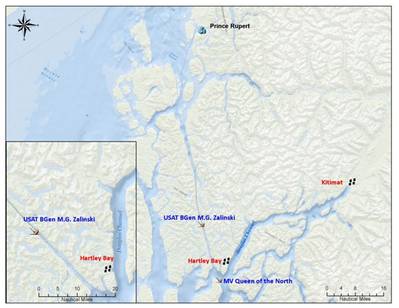 Canada's Minister of Fisheries and Oceans, has informed of the successful completion of the 'Zalinski' Pollution Recovery Operation in Grenville Channel − roughly 100km from Prince Rupert –  on the North Coast of British Columbia. The two-month operation safely extracted approximately 44,000L of heavy Bunker C oil and 319,000L of oily water from the wreck.

The USAT Brigadier General M.G. Zalinski sank in 1946 in Grenville Channel while in transit to Alaska, carrying a variety of cargo. The wreck sits upside down on a rocky shelf in 130 feet of water. Since the wreck was discovered in 2003, the Canadian Coast Guard has launched several operations to patch and seal the wreck as new upwelling became evident. Now after exhaustive efforts, the Coast Guard has concluded the operation.

The Canadian Coast Guard acted on March 2013 reports suggesting an upwelling of heavy oil at the Zalinski wreck site, promptly assessing the situation and patching areas of concern on the wreck.

The project was managed using the Incident Command System (ICS) model, which saw representatives from the Canadian Coast Guard, the B.C. Ministry of Environment, the Gitga’at First Nation, and the Gitxaala First Nation collaborate within a Unified Command at Prince Rupert to make key decisions as the operation proceeded.

"The successful collaboration between representatives from the Canadian Coast Guard, the Gitga'at First Nation, the Gitxaala First Nation and the Province of BC helped build valuable relationships which will be important in supporting future spill preparedness in the local area,” said British Columbia Minister of Environment, Mary Polak.