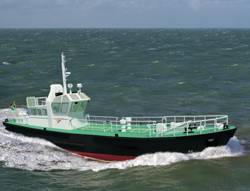 The Transnet National Ports Authority (TNPA) in South Africa has ordered a Pilot Cutter 2706 and its fifth Stan Tug 2006 with Damen Shipyards Cape Town for operations in the expanding Port of Saldanha (South Africa).

Both vessels have been specifically designed for the South African market. The Pilot Cutter 2706 will be delivered in May 2013 and the tug in March 2013.

TNPA already operates four Damen Stan Tugs in South Africa. The STu 2006 is an enlarged design, based on the STu 1906. This parent vessel was adapted to the specific needs of the South African ports, namely increased payload and hull speed as well as increased stern gear protection while handling submerged equipment.

The new tug will be used for general port services and pilot duties in Saldanha, South Africa’s largest deepwater port. Under a recently started programme by President Zuma, aimed at investing in infrastructure and generating jobs,   Saldanha’s port is expanding rapidly. Currently the port’s main export product is iron ore, while its main import product is oil.

Pilot Cutter renewal program
Embracing this initiative, TNPA has decided on a renewal programme of, amongst others, its pilot boats. The new Pilot Cutter 2706 has been designed by Damen Shipyards Cape Town (DSCT) in conjunction with Triton Naval Architects, and is customized for South African conditions. There is, for example, an entrance channel to the Port of Saldanha which is fairly narrow for large ships. Hence, the pilots board incoming vessels as far as 10-15 miles from the harbour entrance. This service condition has resulted in a specific hull shape capable of handling the adverse sea conditions experienced further out, whilst still maintaining speed. The interior design (bridge, propulsion, HVAC, etc.) is based on long-standing and proven technology of Damen pilot boats.

Cape Town
Both vessels will be built at DSCT. Recently the yard has started an expansion programme with the building of a new vessel construction shed and office/workshop building to cater for increased demand and growing work force. DSCT has furthermore established its own Apprentice Training Centre in order to provide government recognised training and qualification for welders and boiler makers so as to add capacity and create sustainable employment opportunities.