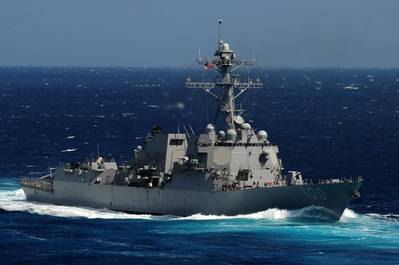 U.S. Navy destroyer USS Kidd (DDG 100) is believed to have a significant coronavirus outbreak on board as it carries out a counter-narcotics mission in the Caribbean, U.S. officials told Reuters on Friday, marking the latest challenge for the military in dealing with the virus.

The officials, speaking on condition of anonymity, said that over a dozen sailors had tested positive for the virus. Given the size of ship, usually only a few hundred sailors, an outbreak like this is likely to cause concern and raise questions about whether it would have to return to the United States.

The cases on the ship appear to be the first onboard a ship currently underway at sea.

The aircraft carrier Theodore Roosevelt was in the Asia Pacific when it had an outbreak onboard, having to eventually dock in Guam. Nearly 850 out of the roughly 4,800 personnel on the carrier have tested positive on the Roosevelt.

The destroyer Kidd is part of the Trump administration’s deployment of more Navy warships and aircraft to the Caribbean to fight drug cartels. Announcing the deployment earlier this month, the Trump administration said the additional warships and aircraft were also aimed and preventing “corrupt actors” like Venezuelan President Nicolas Maduro from exploiting the coronavirus pandemic to smuggle more narcotics.