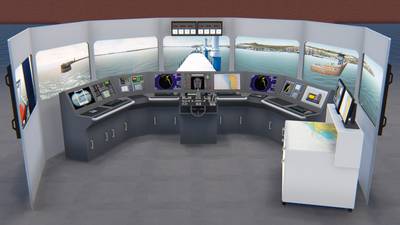 The Mexican Navy selected VSTEP to supply a Class A NAUTIS Full Mission Bridge (FMB) Simulator and 24 NAUTIS desktop trainer stations for the Naval Academy in Veracruz. The simulators will be installed at the new simulator training wing of the Heroica Escuela Naval Militar set to open in Q4 2014.

The Heroica Escuela Naval Militar is the school where future officers are trained for the General Corps of the Mexican Navy. In line with the expansion of the school’s training facilities, a new simulator wing is currently under construction.  The Mexican Navy selected VSTEP as prime simulator provider for its new facility.

VSTEP and its Mexican partner Edutelsa will deliver and install a NAUTIS DNV Class A Full Mission Bridge Simulator and two classrooms of NAUTIS Desktop Trainers for a total of 24 desktop stations. The Full Mission Bridge simulators have a 240° horizontal field of view and are fully compliant with the Class A DNV Standards for Certification No. 2.14 for Maritime Simulator Systems and IMO model courses 1.22 and 1.32.

The simulators will use the NAUTIS Naval Task Force software module, which is specifically designed to meet the training requirements of navies and coast guards and includes tactical communications, amphibious landing, replenishment at sea and Anti-Piracy Training. VSTEP has also developed and integrated different Mexican naval bases for implementation into the simulators.

VSTEP Director, Pjotr van Schothorst, said, “We are proud to be selected as the prime simulator supplier for the Mexican Navy. Our NAUTIS Simulators with Naval Task Force module will provide naval students and personnel with a very effective training tool for naval operations. We look forward to delivery and installation of the simulator classrooms for the new simulator wing in Veracruz and will maintain a strong relationship with the Mexican Navy for future projects.”

Earlier this year, VSTEP won a contract to provide simulators to all the FIDENA schools in Mexico. This Mexican Navy contract strengthens the company’s position as a key provider of maritime simulator solutions in the region.