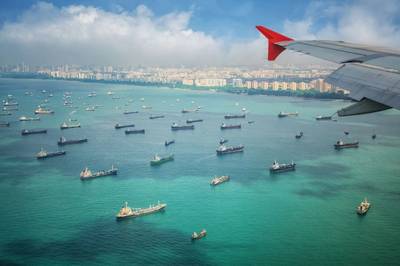 "MPA and ESG welcome the entry of Minerva Bunkering and TFG Marine, which will consolidate Singapore's position as the global bunkering and oil trading hub," the MPA said in a joint statement with Enterprise Singapore (ESG).

The licences are the first to be issued by the port regulator since 2017, bringing the total number of licensed bunker suppliers to 45 in Singapore, and come after the MPA tightened its criteria for applicants.

Singapore accounts for about 20% of a global ship refueling market that sells tens of billions of dollars a year of fuel.

The new requirements include commitments to obtain both bunker supplier and bunker craft operator licenses, rather than one or both previously.

Applicants must also own and operate at least two bunker tankers capable of running on duel-fuels in an apparent push to promote the use of cleaner marine fuels.

In addition to increasing the supply of low-sulphur fuels that comply with the International Maritime Organization's 2020 sulphur regulations, "Minerva Bunkering and TFG Marine will also be required to each operate at least two clean energy dual-fuelled bunker barges," said the statement.

"This will help drive more sustainable bunkering activities in the Port of Singapore."

Reuters in February reported that several companies, including Mercuria and Trafigura, had applied for licenses to supply marine fuel to ships in Singapore.

Tough market conditions and a crackdown on industry malpractice have seen the pool of suppliers in Singapore shrink in recent years, with mostly smaller players exiting.