SmartGrip: An ‘Evolution’ in Bulk Handling 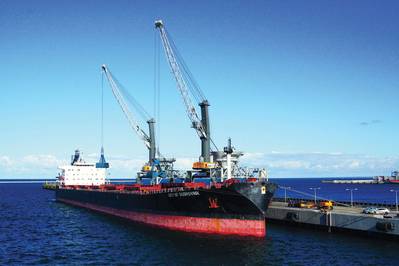 Liebherr Maritime Cranes launched what it is calling a ‘game-changing’ technology: SmartGrip for its mobile harbor crane product range. This technology is designed to operate as an intelligent system which optimizes grab filling rates in a self-learning manner, aiming for better performance and zero overloads.  SmartGrip’s development is based on recent turnover analyses in various ports around the world, as data showed that, on average, only 70% of the grab capacity is used. There are many factors why the grab is not operated at full capacity, including suboptimal grabbing angle and varying material density. For crane operators the estimation of the material density and the right grabbing angle may turn out to be a real challenge. As a result, ports are faced with less turnover than expected.
SmartGrip is a solution designed to optimize grab filling rates. In a field study, Liebherr collected real data of different crane models which were equipped with a wide range of grabs to handle different materials. Additionally, numerous crane operators ensured a broad spectrum of skill-levels during data collection. Liebherr deduced the ideal grab filling model by means of data mining. In operation, the self-learning system automatically adjusts its behavior by recognizing bulk density, compression and granularity as well as current frame conditions like depth of impression or type of grab. Load cycle by load cycle, SmartGrip automatically optimizes filling to maximum capability taking grab size and outreach into account. Right from the second load cycle, SmartGrip ensures that the grab filling rate is above the average of 70%. Within a maximum of seven cycles the full capacity of the grab is utilized.

Zero Overloads
Changing materials and varying density are main challenges for the crane operator in bulk operation. Furthermore, density also depends on depth of impression which means that even when working on the same hatch, handling situation may change. If the driver needs to fill the grab manually, he may overload the crane when pulling the lifting attachment out of sticky material. Frequent overloads lead to a notably shorter lifetime of the crane. Additionally, frequent overloads are also time-consuming as the crane is automatically switched off if there is too much pull on the grab. SmartGrip controls the filling of the grab to suit the load curve of the crane, theoretically leading to optimal crane utilization without overloading. Thus, SmartGrip also works as overload prevention system resulting in an extended lifetime of the crane, saving fuel and time.
Bulk material handling comprises a number of challenges, and to maximize productivity the grab has to be filled to the limit, which means the driver has to fine-tune grab filling by opening and closing the grab as well as hoisting and lowering. This is both stress for the operator and time-consuming.
With SmartGrip is activated Liebherr said that the operator can completely rely on the system for an accurate determination of the material density and optimal grabbing angle in a very short time. The automatic and optimized grab filling means less stress for the crane operator who can then focus more on other important issues like safety.
Achieved turnover depends on many issues, including available infrastructure, driver skills and materials handled. In view of the average grab filling rate of 70%, SmartGrip offers a potential of up to 30% more turnover. Additionally, turnover variance is significantly reduced, leading to more efficiency in operation. Field studies showed that even up to 40% turnover increase are realistic if the grab filling rate is below average. Additionally, SmartGrip partly closes the gap between high-skilled and less-skilled drivers, as some important parts of bulk handling are automatically optimized by the system.
Another feature of the system is the possibility to manually set target loads. If a crane operator needs to load a 40 tonnes capacity truck, for instance, he can advise SmartGrip to fill the grab with 40 tonnes.
In addition, SmartGrip can be retrofit to older Liebherr machines.