Solo Paddler Battered by Weather, Welcomed by Strangers, on 'Reverse the Bad' Odyssey 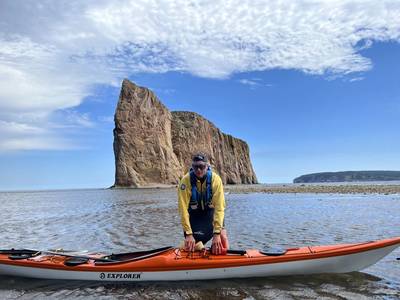 After two months in his kayak, 64-year-old Mark Fuhrmann has succeeded in covering 2,000km of his 10,500km ‘Greater Loop’ paddle. Although battered by high winds, and fighting against large swells and difficult tides, the intrepid Canadian has made his way from Halifax, Nova Scotia to Quebec City, and is now on the boundary of Montreal. His year-long loop will eventually take him back to Halifax, by which time he hopes to have raised over EURO 100,000 for Doctors Without Borders and Captains Without Borders.

Extreme commitment
Fuhrmann, a retired businessman with his own maritime PR and communications firm based in Oslo, Norway (Blue-C), is no stranger to danger in his glass-fiber craft.

In 2018, he undertook a 5,900km charity kayak from Oslo to Athens, Greece, capsizing in large waves, dodging busy sea-lanes and pushing the limits of his physical endurance. However, this trip, he admits, is much tougher.

“So far, it’s been extremely challenging – both physically and mentally, it’s probably the hardest thing I’ve ever done,” Fuhrmann states. “The swells in the Atlantic were one thing, while I seem to have been fighting strong winds, with sudden, frightening gusts, all the way from Halifax to Quebec City.”

Nervous moments
“In addition, there’s often been no place to beach my kayak, with difficult rocks, challenging breaks, and severe tidal patterns,” he says. “I’ve woken up nervous everyday – not knowing what awaits on the next leg of the journey. That’s played tricks with my mind once or twice, making me question my motivation here. But I’m committed to this, I want to make a difference, and that ensures I ‘get back out there’ everyday it’s possible to paddle on.”

Apart from his charity work, and his desire to “create some positive news in a world increasingly focused on the negative”, Fuhrmann says two other factors continue to fire his passion to paddle onwards. Namely, nature and people.

Alone yet together
“It makes everything worthwhile,” he says. “The scenery here is spectacular and, when you’re alone in the water, you become part of it – immersed in the wonders unfolding around you. It’s indescribable. As is the generosity of strangers.

“Every time I meet people along the way they’re incredibly positive about what I’m doing. Sometimes they donate, sometimes they cook me a meal, offer lodgings, give me a beer, or just say a few words of encouragement. All of it refuels my tanks, stokes my faith in the goodness of humanity. It’s strange, but it kind of makes me feel like I’m not doing this alone - that we’re all together out here. I like that thought.”

Great (Lakes) expectations
Fuhrmann will be heading down towards the Great Lakes next, paddling on into the Illinois, Mississippi, Tennessee and Tombigbee Rivers, before reaching the Gulf of Mexico. From there he’ll make his way across Florida and up the Atlantic Coast back to Halifax, arriving, he hopes, early next June, one year after his departure. It’s a route that’s been attempted before, but never completed with a kayak.

To follow his progress, and donate to Doctors Without Borders and Captains Without Borders (which focuses on providing education scholarships and assistance to females from disadvantaged backgrounds looking to forge careers at sea) please see www.mark-ervin.com.

Videos from Mark's journey can be viewed here.