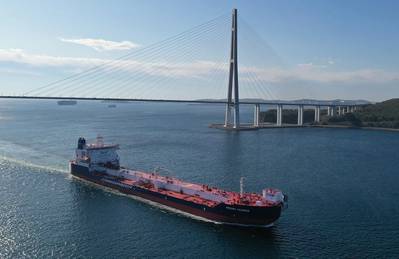 On October 6, 2019, a naming and flag raising ceremony was held in Vladivostok for Sovcomflot’s latest Arctic shuttle tanker. The vessel was named after Mikhail Lazarev, a prominent Russian admiral and explorer known for his discovery of Antarctica.

The tanker was ordered by Sovcomflot to transport crude oil for the Novy Port project, under a long-term agreement between Sovcomflot and Gazprom Neft.

The ceremony was attended by Oleg Melnikov, Vice-Governor of Primorsky Region and Sergey Frank, Chairman of the Board of Directors of Sovcomflot, as well as faculty and cadets of the Admiral Nevelskoy Maritime State University (MSU) and Vladivostok Presidential Cadet School, representatives of Sberbank, the Russian Maritime Register of Shipping, and other companies and organisations.

Oksana Tarasenko, Deputy Minister of Economic Development of Russia and a member of the Board of Directors of Sovcomflot, is the new vessel’s sponsor.

Mikhail Lazarev is the latest in a series of unique shuttle tankers of the Shturman Albanov series, designed for the year-round transportation of crude oil from the Gulf of Ob (the Kara Sea) for the Novy Port project, operated by Gazprom Neft. The first three ships in the series were delivered in 2016 and have since safely transported 9.5 million tonnes of oil across the Northern Sea Route. The high performance of these tankers under extreme Arctic conditions and the further growth of Novy Port project have facilitated the addition of an additional vessel of the series.

"This newest Sovcomflot tanker is named after Mikhail Lazarev, an illustrious Russian explorer. We pay tribute to the deeds of Russian seafarers who have discovered Antarctica and placed it on the world map, as well as making a major contribution to the unique Russian school of high-latitude navigation. The vessel’s characteristics place our newest Arctic shuttle tanker, Mikhail Lazarev, amongst the most advanced ships in the global tanker industry", said Sergey Frank.

All vessels of this series are designed for year-round operations in the Arctic Sea basin. With an ice class of Arc7, they are capable of sailing independently through ice up to 1.8 meters thick and operating at temperatures down to minus 45 degrees Centigrade. The design of these vessels takes into account the specific features of the Gulf of Ob, and allows the tankers to maneuver freely in the shallow waters of the gulf.

In 2017, Shturman Albanov, the lead ship of the series, was named ‘The Ship of the Year’ at the international Marine Propulsion Awards. The same year, Sovcomflot was awarded first prize at the International Competition of Scientific, Technical and Innovative Developments aimed at the Exploration and Development of the Arctic and the Continental Shelf, held under the auspices of the Russian Ministry of Energy, for the development and practical implementation of technological solutions enabling year-round oil shipments from the Gulf of Ob.

Drawing upon Sovcomflot’s experience of operating the previous tankers of the series, the vessel's propulsion configuration was optimized to increase its operational efficiency in challenging ice conditions.

Mikhail Lazarev flies the Russian flag and has Saint Petersburg as her home port. Her crew numbers 25 people.