Sovcomflot to Sell up to 17% Stake in Moscow IPO 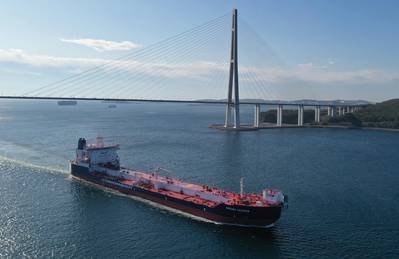 Russia's top shipping company Sovcomflot plans to sell a 15.5%-17% stake in new shares and raise around 42.25 billion roubles ($534 million) in an initial public offering (IPO) on the Moscow Exchange, the company and analysts said on Monday.

The rouble was trading close to a 6-month low against the U.S. dollar on Monday.

State-owned Sovcomflot, which specializes in shipping petroleum and liquefied natural gas, has set the IPO price range at between 105 and 117 roubles per share, it said on Monday. The pricing is expected on Oct. 7.

That range values the company at 250-270 billion roubles ($3.2-3.5 billion) after the IPO and leaves plenty of room - perhaps up to 25% - for the shares to rise after they are listed, said Vladimir Soloviev, an analyst at Promsvyazbank.

That could be important, as the government has said it could further reduce its stake in future, said VTB Capital analyst Elena Sakhnova.

The Russian government, which will remain Sovcomflot's controlling shareholder after the IPO, has considered listing the company for years as part of its privatization plans.

JERA, the world's biggest liquefied natural gas(LNG) buyer, said on Wednesday that it has begun LNG bunkering business in central Japan through its jo