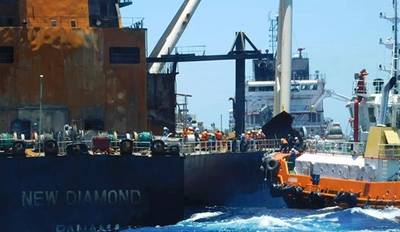 Sri Lanka has allowed a fire-hit supertanker to sail to the United Arab Emirates, where its oil cargo would be transferred to another ship for further supplies to Indian Oil Corp, officials said.

The approval for the ship to leave Sri Lankan waters has been given by the maritime rescue coordination center and it is likely to sail towards the UAE, Captain Indika De Silva said.

In early September, the New Diamond caught fire after a blast in its engine room. The ship, loaded with 2 million barrels of Kuwaiti oil, chartered by IOC left two long trails of fuel oil.

IOC chairman S.M. Vaidya said the cargo loaded on the tanker will be transferred to another vessel at Khor Fakkan port in UAE and eventually be taken for processing at the Paradip refinery.