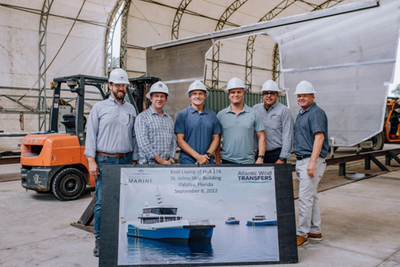 The Palatka, Fla. shipbuilder held a keel laying ceremony on September 8, marking the start of construction for the first of six new 24m aluminum catamarans that will AWT will use to service the U.S. offshore wind industry.

AWT announced the orders with St. Johns Ship Building in August, revealing that the first two vessels are expected to be delivered in the summer of 2023 and January 2024, with four further builds in the pipeline. The vessels will each have capacity to transport 24 personnel to and from turbines.

“We are proud to be chosen as part of Atlantic Wind Transfers successful CTV operation. St. Johns Ship Building appreciates the trust and confidence that Charlie Donadio, President and Founder of AWT, and his team have placed in our hardworking and dedicated employees,” said Jeff Bukoski, President of St. Johns Ship Building. “We will also continue to make improvements to our facilities that allow us to construct greater numbers of similar, newbuild vessels.”

Charles A. Donadio Jr., Founder of AWT, said, “Our team is excited to be moving forward building with St. Johns, this collaborative design-build strategy will enable AWT to parlay its experience to provide future charter clients with the most reliable multi-purpose crew transfer vessels in the U.S. in the years to come.”

The Ambitious, Chartwell Marine’s flagship CTV design, will be U.S. Jones Act-compliant, certified under U.S. Coast Guard (USCG) Subchapter L and able to operate at any wind farm under the safety and inspection standards of the USCG. AWT currently operates two CTVs in the U.S. under long-term contracts, servicing the Block Island Wind Farm for Orsted and Coastal Virginia Offshore Wind Farm (CVOW) for Dominion Energy.

Edward Sheets, Executive Vice President of Americraft Marine Group, said, “We are excited for the opportunity to commence building this series of CTVs for Charlie and his team at AWT. With the owner’s choice of a proven vessel design and our dedication to quality craftsmanship and manufacturing, I look forward to an outstanding result as we further bolster our contribution to the growth of renewable energy.”