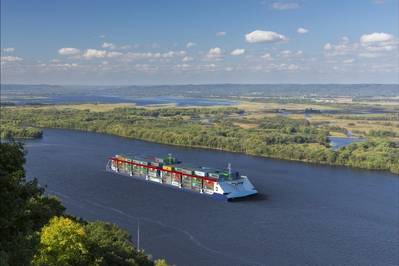 Key stakeholders behind the efforts to launch innovative container-on-vessel (COV) service to the Midwest on Firday announced that Hawtex Development Corporation is signing on as the lead developer for a new COV port facility in Jefferson County, Mo. to be developed in collaboration with Fred Weber/Riverview Commerce Park LLC and integrating a 300+ acre adjacent parcel owned by The Doe Run Company. The new port will be a critical link on the new, all-water, north-south trade lane connecting the Midwest and the St. Louis region to the lower Mississippi River and on to worldwide destinations. Representatives from the Jefferson County (MO) Port Authority, Jefferson County, Missouri, Bi-State Development, American Patriot Holdings LLC/American Patriot Container Transport LLC and APM Terminals joined the newest partners in this bold initiative in Herculaneum, Mo., where the port will be located, to provide details on the new facility and the service it will support.

Hawtex Development Corporation, a business development and consulting company with operations in Texas and Hawaii, has been working with American Partiot Holdings over the past several years to help in identifying and establishing market-ready locations for Mississippi River intermodal container facilities, with an initial focus on the Memphis and St. Louis regions. In the St. Louis region, the Herculaneum site that is already home to Fred Weber/RCP’s current port facility and adjacent to the parcel owned by The Doe Run Company emerged as the most advantageous site to develop a state-of-the-art intermodal container facility to serve this central Midwest region for both the export and import of containerized cargo.

“Through this new collaboration with our partners here in Jefferson County, Hawtex is looking forward to leading the development team for the planned facility on the Mississippi River at Herculaneum,” said James Hurley, President of Hawtex Development Corporation. “We will be leading discussions with RCP and The Doe Run Company principals to complete a comprehensive Development Agreement beginning early in the new year, and we will be meeting with and confirming service requirements for a number of St. Louis-based and regional beneficial cargo owners throughout Q1 of 2022. Our goal is to bring this facility to operating status in Q4 of 2024.”

The facility is in the early stages of development and the new partnership allows all parties to start planning efforts that enable final investment decisions. The total amount of the investment to be made at the new port is yet to be determined.

Sal Litrico, Chief Executive Officer, American Patriot Container Transport LLC (APCT), which is developing the patented new vessels that will carry the containerized cargo along the underutilized Mississippi, Illinois and Missouri rivers, also revealed at the event that APCT has issued a solicitation to seven US shipyards for construction of four of the patented container on vessels that will provide the new COV service, and an option for four more, another critical milestone in this initiative. The call for submissions was issued Dec. 14 and proposals are due at the end of February.

“The new partnerships being forged today and the advancements we’re making toward construction of the new vessels represent another huge step forward for this unique supply chain option that will reduce transportation costs for shippers by approximately 30 to 40%,” said Litrico. “The Mississippi River is ice free and lock free from the St. Louis region all the way south to the Gulf Coast, enabling us to bring our new vessels with the capacity to carry 2,375 20-foot long by 8-foot tall shipping containers right into the heart of the Midwest, and this new port facility will be developed specifically to be able to handle those vessels and containers.”

Mark Denton, Vice President of Fred Weber/Riverview Commerce Park, shared his enthusiasm for the proposed new service and the role that RCP will play in it.

“When Fred Weber, Inc. set out to start Riverview Commerce Park in 2013, our CEO, Doug Weible, told me that we would be handling containers here someday. While Doug has always had great foresight, I don’t believe even he could have envisioned what the APH team has put together with these amazing new vessels that will revolutionize the container shipping industry, not just in the Midwest, but throughout the world,” said Denton.

The announcement about the new Jefferson County facility follows news of other recent milestones met that are helping to move the new COV service closer to reality. In August of 2020, American Patriot Holdings LLC (APH) and Plaquemines Port Harbor and Terminal District (PPHTD) in Louisiana announced they had signed a letter of intent to develop a multimodal, state-of-the-art container terminal at its facility near the mouth of the Mississippi River, which would be the gateway port for the new COV service. APM Terminals North America was recently announced as the Container-on-Vessel terminal operator for the gateway port and is working with global shippers to integrate this proposed new logistics system with Midwest manufacturers and producers.

“The Plaquemines protected river port location and export/import market strength coupled with the strategic middle-America location of the Herculaneum port in the St. Louis region makes this a very unique supply chain offering for customers and our growth ambitions,” said Brian Harold, Managing Director of APM Terminals. “We look forward to working with all of the partners involved and with state and local leaders to ensure both ports are set up for long-term success.”

The vessels & the opportunity
The patented APCT vessels will be built in two sizes with the larger liner vessel traveling between the gateway terminal in Plaquemines and the Mississippi River ports in Memphis, Tenn., and the new port facility in Herculaneum. The smaller hybrid vessel will have a container capacity of 1,800 TEUs and is designed to move through locks and low-lying bridges on the tributary rivers, providing service from those two primary Midwest ports to feeder ports along the Mississippi, Missouri and Illinois rivers in the St. Louis region and other upstream ports, including ports in Kansas City and Jefferson City in Missouri and in Joliet and Cairo in Illinois and Fort Smith in Arkansas.

Both vessels are designed with a patented Exoskeleton Hull Structure designed to limit the vessels’ lightship weight to maximize cargo payload. The second patented feature is the Minimal Wake Bow Structure which minimizes hull resistance enabling upriver speed of 13 miles per hour with minimal wake.  Expected round trip times to Memphis is six days and St. Louis in 10 days, significantly faster than traditional barge tows. The vessels will also be environmentally friendly, utilizing liquefied natural gas (LNG) power, and cargo flexible with ability to carry a diversity of cargo, including refrigerated containers.

“Given the supply chain disruption we’ve seen over the past two years and the continuing congestion at the West Coast ports, there is no question that shippers need alternatives,” said Mary Lamie, Executive Vice President of Multi Modal Enterprises for Bi-State Development and head of the St. Louis Regional Freightway, which has been working to build relationships with other Midwest ports over the past few years to help advance the COV initiative. “This is a new option to transport freight. The state of Missouri and the St. Louis region already play a critical role as a reliever during supply chain disruptions and our freight advantages are fueling this new opportunity to elevate the Mississippi River and the Missouri River’s role in global trade.

The proposed new service will also be welcomed by members of the agriculture industry, who recognize that currently 50% of U.S. crops and livestock are produced within a 500-mile radius of the St. Louis region, including approximately 80% of corn and soybean acreage.

“Missouri’s river system is an invaluable means of transportation for our state’s number one industry – agriculture. This container-on-vessel service allows our supply chain to remain strong and reliable, delivering products in the most sustainable, efficient and cost-effective way to end-users,” said Gary Wheeler, Missouri Soybeans CEO and executive director. “As Missouri’s leader in agricultural exports, our organization and farmers have been involved and invested in American Patriot Holdings to move more product and aid the state’s economy and environment. Our soybean growers understand this immense value and is why we continue to devote dollars into modernizing our state’s infrastructure.”