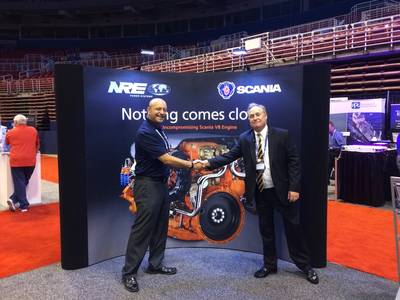 The 5th annual inland IMX show coincides with the first ever FreightWeek STL. For transport professionals, supply chain stakeholders and inland operators alike, there was something for everyone.
St. Louis, MO: This week’s IMX inland marine industry tradeshow may have been the primary focus for inland stakeholders, but there were many more reasons to be here in St. Louis. Parallel with and coordinating with the 5th annual event was the weeklong FreightWeek STL event intended to spotlight freight and transportation industries, opportunities and to underscore the St. Louis region as a global freight hub. Importantly, the collaboration also highlighted the need for intermodal solutions and not necessarily modal competition.
Perhaps the week’s predominant theme was that everyone is a winner when freight hubs come together to leverage the best of each mode to complement one another. After all, any transport mode is only as good as the one that immediately precedes, or follows it. That's a fact.
For those who travelled to St. Louis solely for the IMX Show - a wide range of inland OEM’s, operators, shipyards and service providers populating the tradeshow floor inside the dome at America’s Center - the effort was reason enough begin planning next year’s trek. Morning and afternoon education sessions allowed attendees and exhibitors alike the opportunity to discuss and negotiate new business, while at the same honing professional knowledge.
Circling back to FreightWeek STL, more than half a dozen proclamations issued by the City of St. Louis, counties on both sides of the Mississippi River, Missouri State Legislature, and the state of Missouri call attention to the inaugural effort to bring together freight and transportation experts and exhibitors from around the nation to share ideas and collaborate on the forward movement of America’s freight.
Locally, the St. Louis Regional Freightway, which was established to create a comprehensive, regional approach to freight management, infrastructure and marketing looked to advance freight innovation and collaboration nationally, while also raising awareness of the entire bi-state region as a premier freight gateway and multimodal hub with a diverse network of freight infrastructure.
Coinciding with May 22nd as National Maritime Day, the two events served to recognize the vital role our waterways play in the nation’s commerce. The St. Louis Regional Freightway’s port system, which includes the nation’s third and eighth largest inland ports and helps more than 105 million tons of cargo pass through the St. Louis region annually, is just one of many aspects of the 630 million tons of cargo, valued at over $73 billion, that powers through the inland waterway network each year. FreightWeek STL continues through May 24th.
Drilling down a little deeper, the week’s events also reinforced interest in plans for a new 4200-acre intermodal container terminal within the Port of Plaquemines Harbor and Terminal District. The project, a partnership between the Port and American Patriot Holdings (APH) calls for the development of a logistics system for “vessel operations comprised of deep-water docking at the Pointe Celeste Container Terminal and multiple upriver terminals.” That’s the Mississippi River, of course, and initial upriver terminals could be sited in Memphis and St. Louis. Indeed, St. Louis aims to be a big part of this project, if it comes to fruition.
The proposal has two major, complementary parts. One is the new land-side infrastructure. The second is for the facility to be the operational base for a new type of container vessel being developed by American Patriot Container Transport, LLC (APCT); an APH subsidiary. When constructed, these planned vessels could really scale up inland river freight transport – both in terms of size and speed.
The APH proposal calls for staying below the locks, or in other words, operating entirely below the southernmost locks on the upper river systems so that they can provide a ratable and dedicated liner service. Sal Litrico, American Patriot Holdings (APH) CEO and his colleague, Joseph Gehegan, sat down with me for a brief update on the project, something that was first reported in the June 2017 edition of MarineNews magazine. With a lot of water under the bridge since then, Litrico reported that much progress had been made in the past 12 months.
Both APH executives are confident that the nascent project will come to life, but they conceded that it would only happen if the intermodal cargo demand is there to support it. That momentum is building and this week in St. Louis, the project appeared to be picking up speed.
Back on the trade show floor at ‘The Dome,’ there are plenty of new stories emerging, pending deals to report on and recent successes that merit further coverage within our pages. Look for these and more in coming editions of MarineNews. To that end, the June edition of MarineNews heads for the printer this week – look for it in your mailbox shortly.
As the week winds down – and it isn’t over yet – the decision to position the first ever weeklong FreightWeek STL event alongside IMX was a good one. No doubt it beefed up attendance for both and more importantly, it brought together, on the waterfront, multiple transport modes that need to not only talk to one another, but also interact within the greater supply chain. This week in St. Louis brought that effort a little closer to happening.
Unofficially, next year’s plans include close coordination of the two events again. For my part, and if so, it’ll be worth a return visit. And with that said, I’ll sign off from STL.
Joseph Keefe is a 1980 (Deck) graduate of the Massachusetts Maritime Academy and lead commentator of MaritimeProfessional.com. Additionally, he is Editor of both Maritime Logistics Professional and MarineNews magazines. He can be reached at jkeefe@maritimeprofessional.com or at Keefe@marinelink.com.