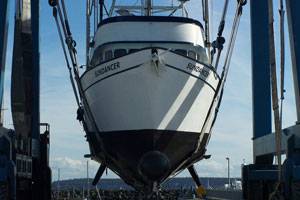 McVicker says his Wesmar stabilizers provide more comfort and lessen fatigue for his crew. The three month albacore season, running from end of June to October, requires McVicker and his crew to constantly travel at sea each day.

McVicker learned about Wesmar stabilizers when Bill Hammer, owner of the F/V Silver Lady, recommended them. Hammer was the first to install an active fin stabilization system on a fishing vessel anywhere in the world.

“Anyone longlining for cod, halibut and fishing for albacore can appreciate the value of stability and lift in rough waters. By maintaining full boat speed in rough water conditions, fishing boats are more efficient and safer. The boat is not awash with water causing the catch to slosh around in the fish hold and crew slipping around on the decks. I can’t imagine operating without them,” Hammer stated.