It takes a thick skin to live in New York City, let alone to run its Staten Island Ferry service. James C. DeSimone, Deputy Commissioner, Ferry Division, New York City Department of Transportation, has been charged with running the ferry service for the last 16 years. We met with him for his insights on the challenges of keeping the iconic ferry running safely and efficiently.

Jim DeSimone has led a maritime life, with his time equally split between the private and public sectors. His maritime affiliation is literally in his blood, as his father Guy J. DeSimone was a 1936 graduate of and long-term, highly regarded professor at the New York State Merchant Marine Academy – which later became SUNY Maritime College – in the Bronx. In fact, Guy J. DeSimone is a SUNY Maritime Heritage Hall Inductee, credited with transitioning a nautical school into a fully accredited college. “We grew up on the campus,” said DeSimone, “around boats and on the water, so I always kind of figured it was my natural career path.”

After graduating SUNY Maritime, DeSimone sailed mostly on tankers, serving in nearly every capacity from Able Seaman through Master. He and his wife were enjoying the commercial shipping life living in Florida when the opportunity came to return to his roots as the captain of the training ship and the commandant of the cadets at the Maritime College in the Bronx, NY. While he enjoyed his tenure helping to shape the next generation of mariners, after 10 years in academia, DeSimone was itching to get back to the commercial side, where he landed first as a senior vice president with Great Lakes Towing, followed by a stint as a Vice President of-operations for NY Water Taxis. Then, unexpectedly, the position with Staten Island Ferries opened up in the wake of the most significant accident in Staten Island Ferry history, the ferry Andrew J. Barberi allision of October 2003, an accident which included a number of fatalities and serious injuries. “For the city to go outside the system to hire was huge,” said DeSimone. “At the time, both the mayor and city council had a strong mandate to improve ferry operations, and to make changes in the wake of this accident.” 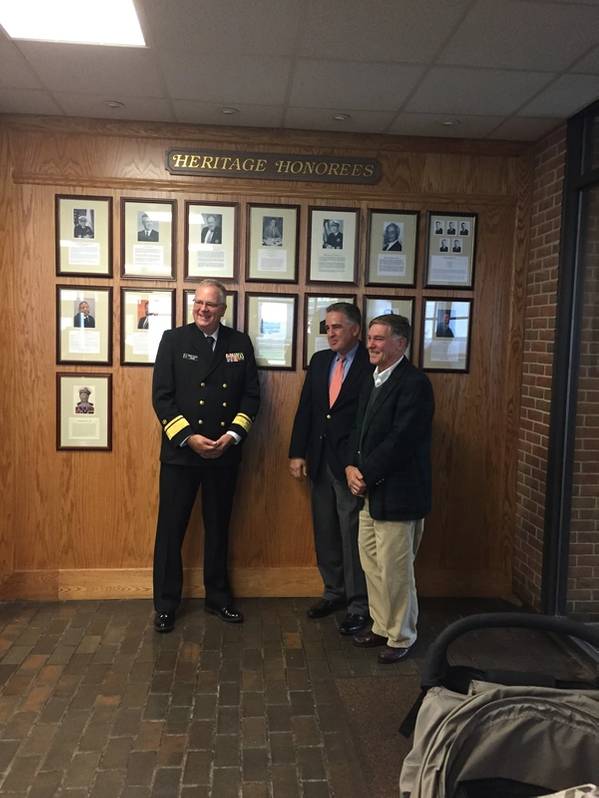 RADM Michael Alfultis, President, SUNY Maritime College, with Jim’s brother Rich DeSimone and Jim DeSimone. Photo: Jim DeSimone By the Numbers
The Staten Island Ferry is an iconic part of New York City’s history and future, carrying more than 25.2 million passengers on a five-mile, 25-minute trip per year, for free, courtesy of about 40,404 trips made annually between Whitehall Street in lower Manhattan to the St. George Ferry Terminal on Staten Island. The system operates eight vessels on the route, from the largest, 5,300-passenger Barberi class vessels (2), down to the smaller 1,100-passenger Austin class vessels (2), with a trio of 4,400-passenger Molinari class vessels; and the 3,000-passenger, 1965-built Kennedy. (There are currently three 4,500-passenger Ollis class ferries under construction, with the first to deliver in the Autumn of 2020).

Helping to ensure the vessels and terminals keep operating 24/7/365 is a workforce of about 650, including 400 vessel personnel; 100 in maintenance covering all trades with the balance in administration and terminal staff.

The Staten Island Ferry is run by the City of New York for one pragmatic reason: To transport Staten Islanders to and from Manhattan. “In the private sector, businesses exist for one purpose: to make a profit … and there’s nothing wrong with that,” said DeSimone. “Government exist to provide services…By and large it was a pretty good system, but it was somewhat stuck in the past technologically,” said DeSimone. “They didn’t have speed logs, ECDIS systems and the like on the ferries, and they certainly didn’t have a Safety Management System.” 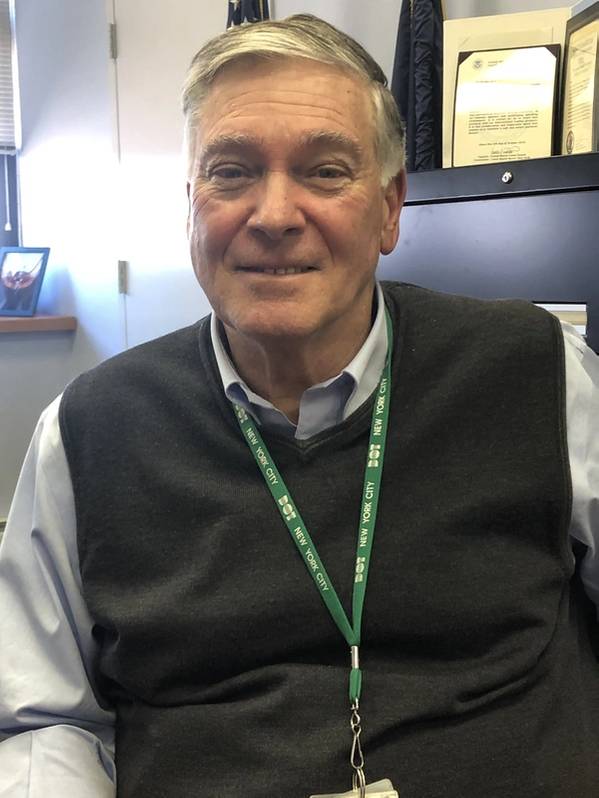 “The rule of thumb is if the cost of a life extension is 51% of the newbuild cost, you build new. If it’s 49% or less, you extend the life of the current vessel. When we did our evaluation, our life-extension costs were close to 70%, and with passenger demand forecasts, the decision was easy (to build new).” James C. DeSimone, Deputy Commissioner, Ferry Division, New York City Department of Transportation, Staten Island Ferries. Photo: Greg Trauthwein A Time for Change
The October 15, 2003 incident provided a wake-up call for the ferry service, and DeSimone and his crew set about making changes, from the foundation of a new Safety Management System that took nearly 18 months to devise and implement, to a top to bottom review of maritime training and education.

Standardized training for Captains and Assistant Captains is docking in every slip – from Manhattan to Staten Island to the organization’s maintenance piers – on every class of ferry and then signed off on by the captains.

In addition, Staten Island Ferries has worked with Marine Learning Systems on a blended learning and training platform for new deckhands and mates.

Staten Island Ferries owns and operates its own simulator, with another due to enter service soon, that is geared toward Bridge Resource Management (BRM) and ECDIS training. It seeks to maximize its training return by, for example, outfitting the new simulator with the actual equipment that will be featured on the new-builds. It also sends crew to SUNY Maritime for training as needed, with MITAGS carrying the heavier workload for Staten Island captain and assistant captain training courses in and out of the simulator.

“MITAGS has the Navigation Skills Assessment Program (NSAP), with all of our operating officers participating,” said DeSimone. In today’s world, before anyone gets moved up to an assistant captain or captain, they must complete the NSAP program in addition to evaluations from other captains and administration.

“When it comes to promoting a captain and assessing their skills, human evaluation is subjective and some of that’s ok,” said DeSimone. “But we were looking for a solution that would be as objective as possible.” NSAP, combined with human evaluation, provided the solution.

In tandem with the design and implementation of the Safety Management System were several additional changes, including: 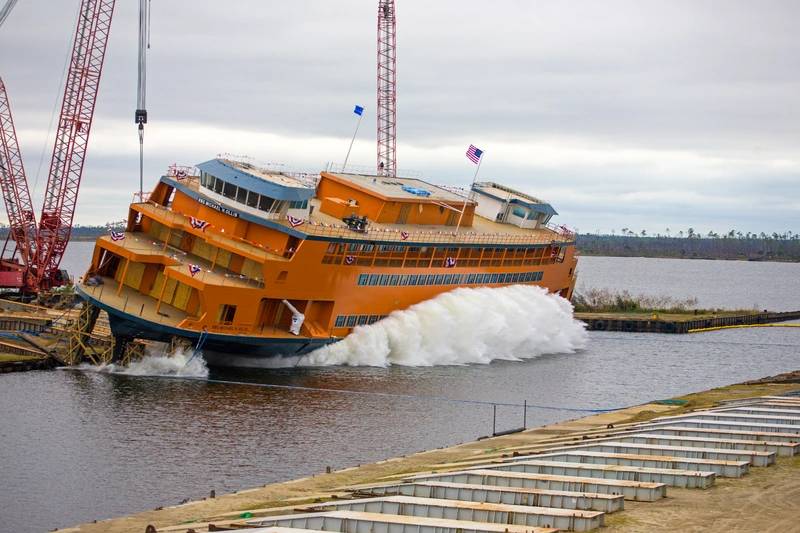 Building New Ferries
The decision to build new vessels is never taken lightly due to the tremendous upfront and life-cycle costs of an asset that is designed to last more than 30 years, or in the case of Staten Island Ferries 40 to 50 years, while operating in the harsh marine environment.
“The rule of thumb is if the cost of a life extension is 51% of the newbuild cost, you build new. If it’s 49% or less, you extend the life of the current vessel. When we did our evaluation, our life-extension costs were close to 70%, and with passenger demand forecasts, the decision was easy (to build new).”

Currently Staten Island Ferries has a trio of 4,500-passenger, double-ended newbuilds with cycloidal propulsion under construction at Eastern Shipbuilding in Florida, with the first scheduled for delivering later in 2020, the last for delivery in early 2022. “We’re big fans of Voith (cycloidal propulsion) here,” said DeSimone. “It’s a great system. My first exposure to it was the first ship I sailed on when I graduated Maritime, a research ship.” Today the ferry system operates four vessels with the Voith system, the Barbieri class and Austin class. When making the decision on how to propel the new Ollis class of vessels, DeSimone and his team came in with an open mind knowing that maneuverability and reliability are the top two factors, and the decision was an easy one based on a comprehensive propulsion trade off study and decades of experience. “The Voith units have a very high level of reliability, and the maneuverability is unsurpassed, both of which is really important here in New York Harbor” said DeSimone. 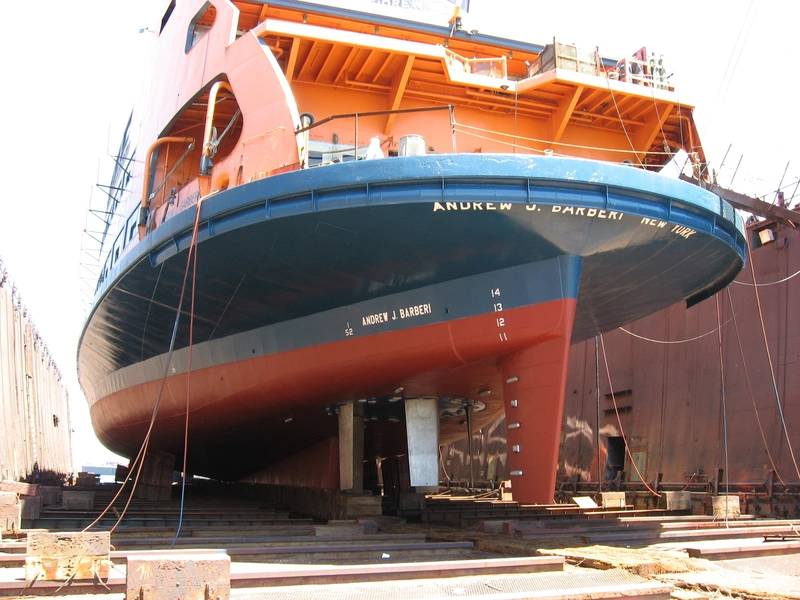 “The Voith units have a very high level of reliability, and the maneuverability is unsurpassed, both of which is really important here in New York Harbor” said DeSimone. Photo: Staten Island FerriesCutting emissions
Public organizations such like the Staten Island Ferries are under pressure, too, to reduce their carbon footprint. “When people start to talk about 2050 it still seems far off,” said DeSimone. “But if we are sitting here now in 2020 talking about building a new class of vessels, these vessels will likely be operating up to or through 2050.”

The new Ollis class ferries will be Tier IV. “We had an emissions projects here with the port authority (more than 10 years ago) which essentially funded the emissions upgrades on the Staten Island Ferries,” said DeSimone. At the time, the port was engaged in a dredging project to accommodate larger container ships, and the port authority needed to offset emissions to complete the project. “The Austin class actually was one of the first in the nation with an SCR system,” said DeSimone. “The new Tier IV vessels will have urea injection, too.”

Publicly owned vessel operators must take particular care when integrating new technologies, as reliability of service is paramount. Case in point, the Staten Island Ferries trialed bio-diesel more than a decade ago, but while bio-diesel comes with environmental promise, there are also problems, as DeSimone explained. “The use of bio-diesel in the marine environment is very limited. In our case, we have medium speed, higher horsepower engines with fuel purifiers onboard. The purifiers tend to take the ‘bio’ out of the fuel, and the purifier filter clean-up became a huge issue. If the filters aren’t kept clean, you bog the engines down and increase maintenance issues.”

But DeSimone and his technical team keep an open mind, looking for proven technologies that can help it achieve its mission safely, cost-effectively and in step with evolving legislative mandate. While the large, orange double-ended ferries carrying nearly 5,000 people are the vision that most have of the Staten Island Ferry Service, there is another smaller specialty ferry that, upon its replacement, will serve as the testing ground for a new all-electric solution.

The ferry Cosgrove currently runs between City Island and Hart Island, Bronx, a contract with the coroner’s office to deliver bodies to the ‘Potter’s Field’ there. At the time of this interview, the design for the new ferry was just about complete and ready to go out for bid on a new all-electric plug-in ferry, measuring roughly 60 x 40 ft., to replace Cosgrove. “We thought that would be a good opportunity to look at electric in step with the IMO initiative to cut emissions,” said DeSimone. “This one is small enough that the technology – the batteries and motors – are commercially available. For the rest of our fleet, the technology is simply not there yet.”
When it comes to emission reduction, DeSimone and his team are not remiss to look at new and emerging technology. But caution is heightened as reliability is paramount for this pubic service. “I think it’s important that we have proven technology,” said DeSimone. “We’re not going to experiment with the backbone of our fleet.”