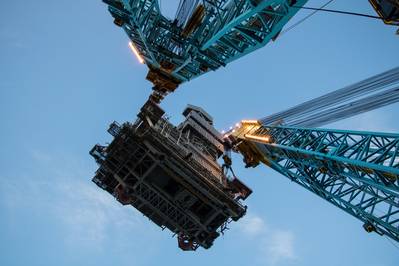 Norway's Statoil will soon start drilling this season's most promising Arctic prospect, Korpfjell, after several disappointing wells in the Barents Sea, the company said on Monday.
The majority state-owned company has stepped up drilling in the Barents Sea this year as the government seeks to attract more explorers to its Arctic waters to make up for declining North Sea output.
The Norwegian Petroleum Directorate said on Monday Statoil's latest well in the Barents Sea, Gemini North, had found only minor volumes of gas and oil.
"The well was drilled with the ambition of proving up additional oil resources in the vicinity of the Wisting discovery, but like the previous Blaamann well, we discovered gas," said Jez Averty, senior vice president for exploration in Norway and the UK.
The Kayak well drilled in June proved to have between 25 and 50 million barrels of oil, too small for a stand-alone development.
Statoil said on Monday it would next drill the Korpfjell prospect near the Russian border, more than 400 kilometres away from the mainland.
"(Statoil's) drilling campaign wasn't a huge success so far, but Korpfjell is the most important well out of the five planned this year in the Barents Sea," Teodor Sveen-Nilsen, an analyst at Sparebank1 Markets, said.
Statoil described Korpfjell as a high-impact well, meaning it could provide a total of more than 250 million barrels of oil equivalent (boe) or 100 million boe net for Statoil.
Sweden's Lundin Petroleum, Statoil's partner in the license, estimates Korpfjell could hold more than 1 billion boe, based on seismic surveys.
Other partners in the license are Chevron, ConocoPhillips and Norway's Petoro.